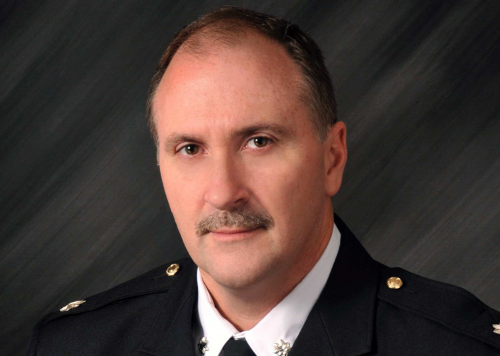 Officials announced Jim Waters, 48, died Thursday afternoon at IU Health Methodist Hospital. He had previously been listed as in critical but stable condition.

The crash happened Sunday just after 1 p.m. on eastbound Interstate 70 near State Road 267 when Deputy Chief Waters slowed his vehicle due to debris in the right lane of I-70 and was rear-ended by a semi-truck.

Preliminary investigations showed that alcohol was not believed to be a factor from the driver of the semi.

Waters spent 27 years with IMPD. He started as an officer, then a detective. He worked in the vice unit, became a commander, before finally reaching the level as the second in charge of IMPD.

IMPD said that individuals that wish to send cards, flowers, or other expressions of condolences, can send them to the IMPD Chaplin’s Office at 50 North Alabama Street, Suite T-120, Indianapolis, Indiana 46204.

Indianapolis Mayor Joe Hogsett asked all flags in Marion County be lowered to half-staff and issued this statement:

It is with heavy hearts that my entire family and I offer our condolences to the family of IMPD Deputy Chief Jim Waters.

Chief Waters comes from a long line of public servants and dedicated his life to serving Indianapolis. He worked tirelessly to build bridges between the police department he served and the community he loved.

His untimely passing is nothing short of a tragedy, but the countless officers who worked beside Chief Waters know the legacy he leaves behind will continue to inspire generations of public safety and neighborhood leaders.

Effective immediately, I am asking that Marion County flags be flown at half-staff, and Steph and I ask the entire Indianapolis community to keep Chief Waters’ family – including his brothers and sisters in blue at IMPD – in their thoughts and prayers during this difficult time.”

The Boys & Girls Clubs of Indianapolis expresses sympathy to the family of James Waters and to the community he served. James truly cared for the less fortunate and in particular our disadvantaged youth. He will be missed.”

The passing of IMPD Deputy Chief Jim Waters is a tremendous loss for Indianapolis. His more than three decades of service, his leadership, and commitment to keeping Hoosiers safe will never be forgotten. I’m praying for his wife Sherry, his children and the rest of his family, along with his IMPD brothers and sisters.”

The Members of the Indianapolis Ten Point Coalition would like to extend our prayers and deepest sympathies to the family of James Waters and the entire IMPD family.

Deputy Chief Waters was a true public servant who worked closely with Ten Point Coalition to help reduce crime and violence in the city of Indianapolis. He truly will be missed.”

My thoughts & prayers remain with the families, friends, and our law enforcement community as we mourn the loss of two public safety servants. Our officers are true Hoosier heroes and deserve our support now and always.”