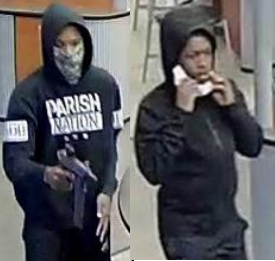 According to IMPD, on May 13, just after 9 p.m., the two suspects entered the Verizon Wireless store in the 7300 block of North Keystone Avenue stole more than 20 phones.

At that time, the suspects removed and stole phones from a safe, placing them in a trash bag and then fled the scene on foot.

The suspects are described as black males in their late teens to early 20s.

During the robbery, one suspect was carrying a TEC-9 style gun and was wearing a black hoodie “Parrish Nation” across the front with black sweatpants, camo bandana and black sneakers.