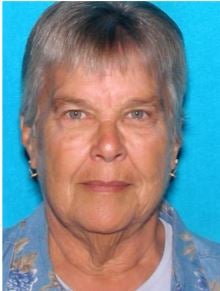 Indianapolis Fire Department tweeted at 8:33 p.m., “Janet has been located safe and sound. Thanx #INDY for your help @IMPDnews”

INDIANAPOLIS (WISH) – Police are seeking the public’s held to find a missing 74-year-old woman with Alzheimer’s disease on the city’s east side.

Janet S. Meyer was described as 5 feet and 170 pounds, with gray hair and green eyes. She was wearing a long sleeve “PINK” shirt and blue jeans. She also may be wearing prescription glasses. Her 75th birthday would be later this week.

“Subject suffers from Alzheimer’s Disease and may be standoff-ish if approached,’ said poster provided by Indianapolis Metropolitan Police Department.

An urban search and rescue was initiated about 7:45 p.m. Monday from the 400 block of South Gray Street, located northeast of the intersection of Southeastern and English avenues and South Rural Street.

Anyone who finds Meyer is asked to assess medical needs and then call the IMPD missing persons unit at 317-327-6160.