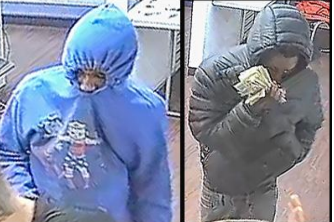 According to Crime Stoppers, both suspects entered the Metro PCS store located in the 600 block of East 38th Street at approximately 6 p.m on March 25.

Police say both suspects then took an undisclosed amount of money from the register and two large trash bags full of cell phones from a safe.

Both suspects are described as black males possibly in their teens.

At the time of the robbery, one of the suspects was wearing a blue hoodie emblazoned with a cartoon character, a red shirt and blue jeans. The second suspect was wearing a black hooded coat and dark gray jeans.