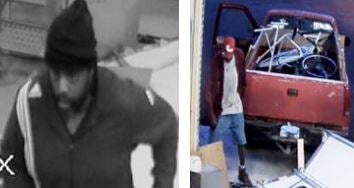 According to IMPD, on May 28, a red Chevy pickup truck was noticed pulling up to the rear garage door of a business located in the 2600 block of Lack Circle Driver.

At that time, one of the suspect’s exited the truck and entered the store. That suspect then ran right to a safe near one of the cash registers and then placed it in a shopping cart.

The second suspect, having acted as the lookout, then proceeded to place the safe in the bed and returned to the driver’s seat.

Police said the truck had wood side rails with a bicycle, an ironing board and other items in the bed.