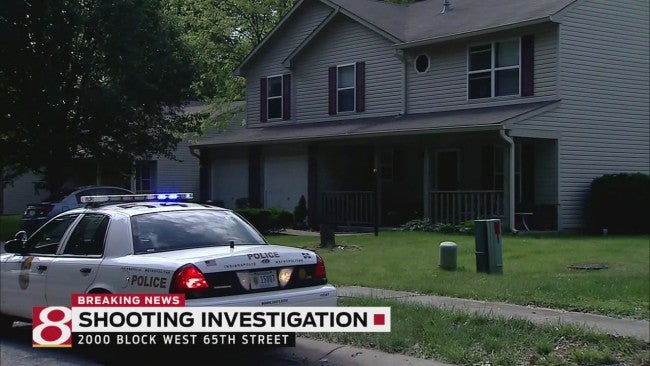 INDIANAPOLIS (WISH) – The Indianapolis Metropolitan Police Department said a gunman shot a man right outside his home, fled the scene and that the suspect is still on the loose.

The homeowner said her 22-year old son was walking outside to his car parked in the driveway when he was approached by a man with a gun.

The victim’s brother who didn’t want to give his name, said they weren’t home at the time of the incident, and therefore didn’t know much.

What he does know is his brother was walking to his car when it happened. According to IMPD, the gunman approached him, used threatening language and demanded cash.

The victim didn’t have anything to give him and police said the suspect then pulled out a gun and shot him on the backside.

According to police, the victim was rushed to Methodist Hospital with non-life threatening injuries.

Police aren’t sure if they two knew each other or if this was a random attack. Investigators spent the morning piecing together evidence and talking to neighbors.

Al King lives a few houses down, and knows the victim.

“This is the first time I’ve ever heard of him having any kind of incident like this ever,” said King.

King said after a rash of break-ins in the area, he beefed up security at his own home. He also joined the neighborhood watch program.

“We usually watch out for each other. Right across the street we have a fireman who lives next door. He’s usually very alert as to what goes on in the neighborhood, as am I,” said King.

Martin Russell has lived in the neighborhood for 30 years and considers it safe.

“During the time I’ve lived here, it’s been very safe area. I’ve not had any break-ins or burglaries,” said Russell.

Still, for other neighbors, the shooting did not come as a shock.

“It’s nothing that has happened during the 30 or some years since I’ve lived here. But that doesn’t surprise me. No. It more or less concerns me about the neighborhood going in the wrong direction.” Russell added, “Just another incident of people acting a fool.”

Police only have a vague description of the suspect and they are asking for the public’s help.

Anyone with any information is encouraged to call Crime Stoppers at 317-262-TIPS.

This is the second shooting in less than an hour in Indianapolis Tuesday. The first shooting happened at 9:24 a.m. on Edwardian Circle. This follows a violent Memorial Day after six people were shot in just 12 hours.