In Japan, Trump pushes allies on trade before meeting Putin 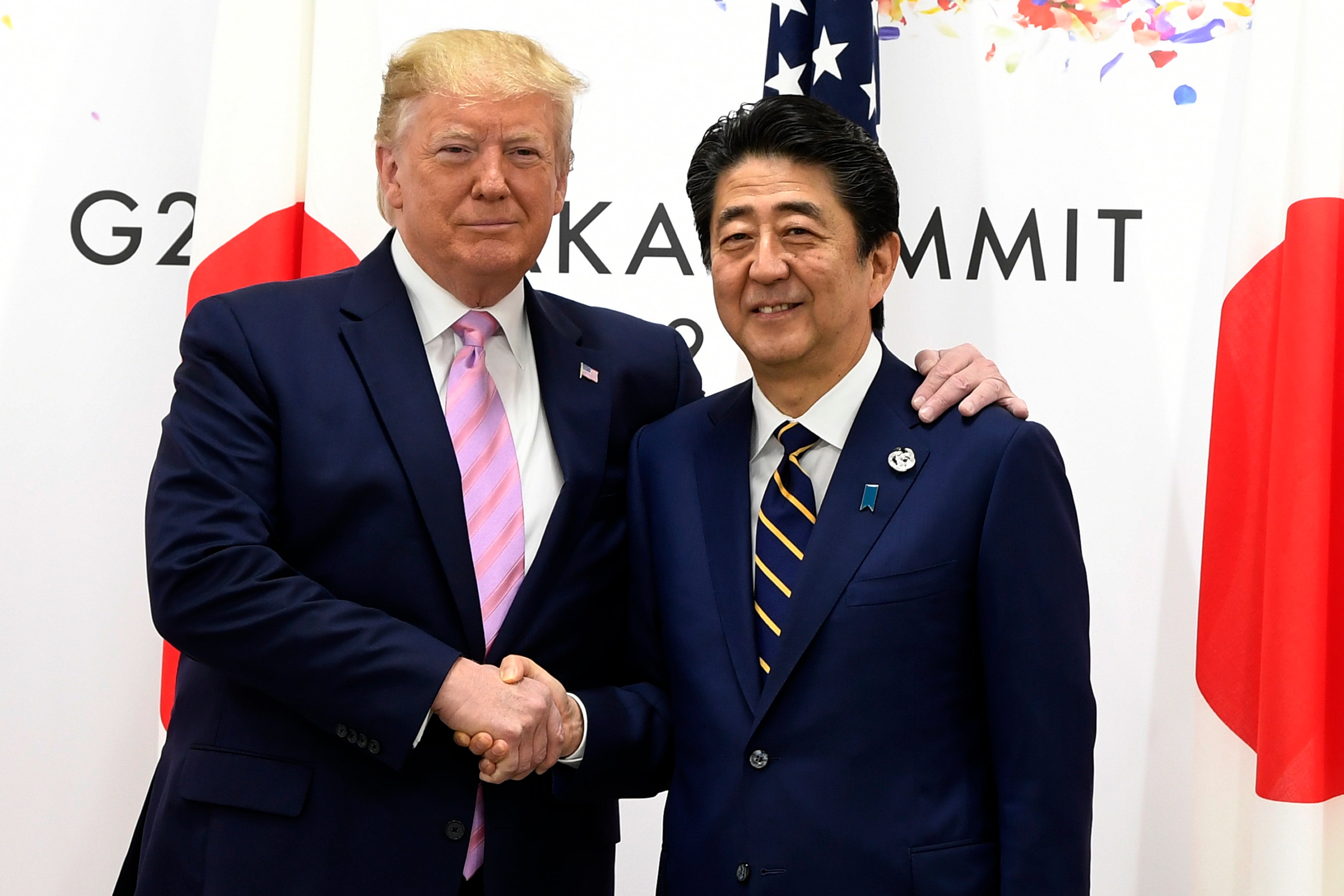 OSAKA, Japan (AP) — President Trump opened his most consequential trip of the year by plunging into a series of high-stakes meetings at an international summit in Japan on Friday by pushing allies on both trade and defense spending.

Trump met first with the G20 summit’s host, Japanese Prime Minister Shinzo Abe. He will follow that with talks with the leaders of India and Germany before holding his first meeting with Russia’s Vladimir Putin since the special counsel found extensive evidence of Russian meddling in the 2016 U.S. election.

“We’ll be discussing trade, we’ll be discussing military,” among other items, Trump said as he sat across from Abe for their discussions. He joked about his previous trip to Japan, in May, when he presented an award to a sumo wrestling champion in Tokyo.

“Everybody’s talking about it all over the world,” Trump said.

Moments earlier, as Abe officially welcomed Trump to the summit, the president waved over his daughter Ivanka Trump and son-in-law Jared Kushner, both senior White House aides, to stand with him for the official welcome photo. Trump will then meet with India’s prime minister, Narendra Modi, whom he warned on Twitter the day before about tariffs on U.S. goods, and then later German Chancellor Angela Merkel.

But the day’s main event will be Trump’s first public meeting with Putin since the Helsinki summit in which Trump refused to side with U.S. intelligence agencies over his Russian counterpart.

Trump said in advance he expected a “very good conversation” with Putin but told reporters that “what I say to him is none of your business.” His aides have grown worried that Trump could use the meeting to once again attack Robert Mueller’s probe on the world stage, particularly since the special counsel now has a date to testify before Congress next month.

Senate Democratic leader Chuck Schumer pressed the president to directly challenge the Russian leader on election interference and send a signal “not merely to Putin but to all of our adversaries that interfering with our election is unacceptable, and that they will pay a price — a strong price — for trying.”

Trump has complained in recent days that the U.S. military alliance with Japan is one-sided, said Germany was taking advantage of the U.S. on support for NATO and tweeted that India’s tariffs on the U.S. “must be withdrawn!” Trump also meets Friday with Brazil’s President Jair Bolsonaro, whom the American leader has come to view as a populist leader in his own image.

Japanese Chief Cabinet Secretary Yoshihide Suga on Thursday brushed off Trump’s complaints that the Japan-U.S. security pact unfairly puts the burden only on the U.S. side, calling Trump’s remarks “irrelevant” and saying the obligations are balanced.

While Trump is in Asia, the Democrats vying to replace him next year are holding their first primary debates. Trump pronounced the opening night Wednesday to be “boring” and was due to be in summit meetings during part two on Thursday night.

Trump’s meeting with Putin will be the leaders’ first extended conversation since the two met in Helsinki, Finland, nearly a year ago. That’s when Trump set off an uproar by declining to say he believed the U.S. intelligence services’ conclusions over Putin’s denials of election interference.

The Mueller report did not establish a criminal conspiracy between Trump associates and the Kremlin to sway the outcome of the election. The finding lifted a cloud over the White House even as tensions have increased between Washington and Moscow. While Trump has long placed a premium on establishing close personal ties with Putin, his government has increased sanctions and other pressures on the Russian government.

At a summit last November in Argentina, Trump canceled what would have been the leaders’ first post-Helsinki meeting after Russia seized two Ukrainian vessels and their crew in the Sea of Azor. Those crew members remain detained, yet Trump — who did briefly greet Putin in Buenos Aires — has opted to forge ahead with the meeting, which will likely include discussions about hotspots in Iran, Syria and Venezuela, as well as nuclear weapons.

The leaders last year announced their withdrawal from a key arms control pact, the 1987 Intermediate-Range Nuclear Forces Treaty. It is set to terminate this summer, raising fears of a new arms race. Another major nuclear agreement, the New Start treaty, is set to expire in 2021 unless Moscow and Washington negotiate an extension. Along with arms control frictions, Russia’s annexation of Crimea and its support for a separatist insurgency in eastern Ukraine also weigh heavily on Russia-U.S. relations.

But the backdrop, as always, will be Russia’s 2016 election interference.

Putin has denied that Russia meddled in the American election to help Trump win, even though Mueller uncovered extensive evidence to the contrary. That included a Russian military intelligence operation to break into Democratic Party emails and efforts by a “troll farm” to spread divisive rhetoric and undermine the U.S. political system by using phony social media accounts.

At the news conference that followed the Helsinki summit, Trump responded to a reporter’s question by declining to denounce Russia’s election interference or side with his own intelligence agencies over Putin. The two men also spent more than two hours in a private meeting in Helsinki with only their interpreters present; some U.S. intelligence officials were never briefed on the discussions.

For Trump, the Putin meeting comes amid a gauntlet of negotiations on international crises, trade wars and a growing global to-do list.

Trump landed in Osaka on Thursday amid a tropical cyclone that is predicted to turn into a typhoon — a possible metaphor for the four days of high-stakes diplomacy that lie ahead. As his re-election bid heats up, Trump was eager to produce breakthroughs on a series of foreign policy challenges including the showdown between the U.S. and Iran, a trade war with China and stalled nuclear talks with North Korea.

The summit will be a test of both Trump’s go-it-alone style as well as his “America First” doctrine that has frustrated traditional allies over disputes on defense spending and trade and set the United States apart from global consensus on how to deal with international concerns like climate change and Iran’s nuclear program.