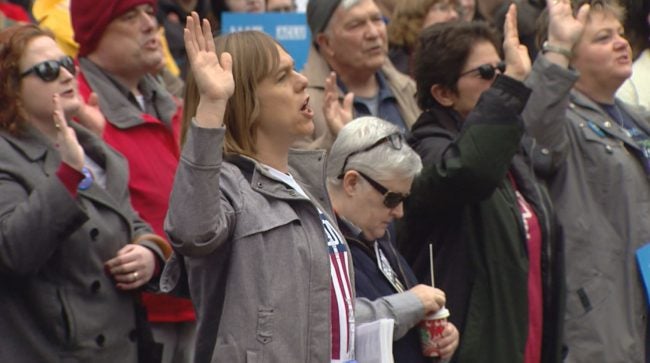 INDIANAPOLIS (WISH) – At the same time President Donald Trump took the oath of office, some staged a counter rally in Indianapolis.

Several hundred people rallied on Monument Circle Friday at noon. They said with all the rhetoric of the past election cycle, the message was about inclusion.

“We need to move toward an atmosphere where we value the dignity of every human being,” said Rabbi Sandy Sasso, of Congregation Beth-El Zedeck, who spoke at the rally.

The rally was dubbed BELONG Indy. People showed up with signs, others with their kids.

“We are all ready to be able to work together and we may disagree, but we can certainly work together,” said Natalie Lapish, who attended the rally.

In the crowd were racial minorities, religious minorities, members of the church, and those in the LGBT community. The idea behind it was inclusion.

“Rather than have a protest rally, I thought it was important that everyone feel that Indianapolis, and recognize that Indianapolis is a supporting community,” said David Jose, who planned the rally.

“That’s a great message amid all the discourse, all the strife that’s been going on in the country, especially today,” said Brenton Fowler, while listening to speakers.

The rally was part prayer vigil, and part call to action. The crowd taking a so-called people’s oath to protect the country’s constitution.

More than 10 organizations took part in the rally, including the ACLU, Planned Parenthood and the Muslim Alliance.