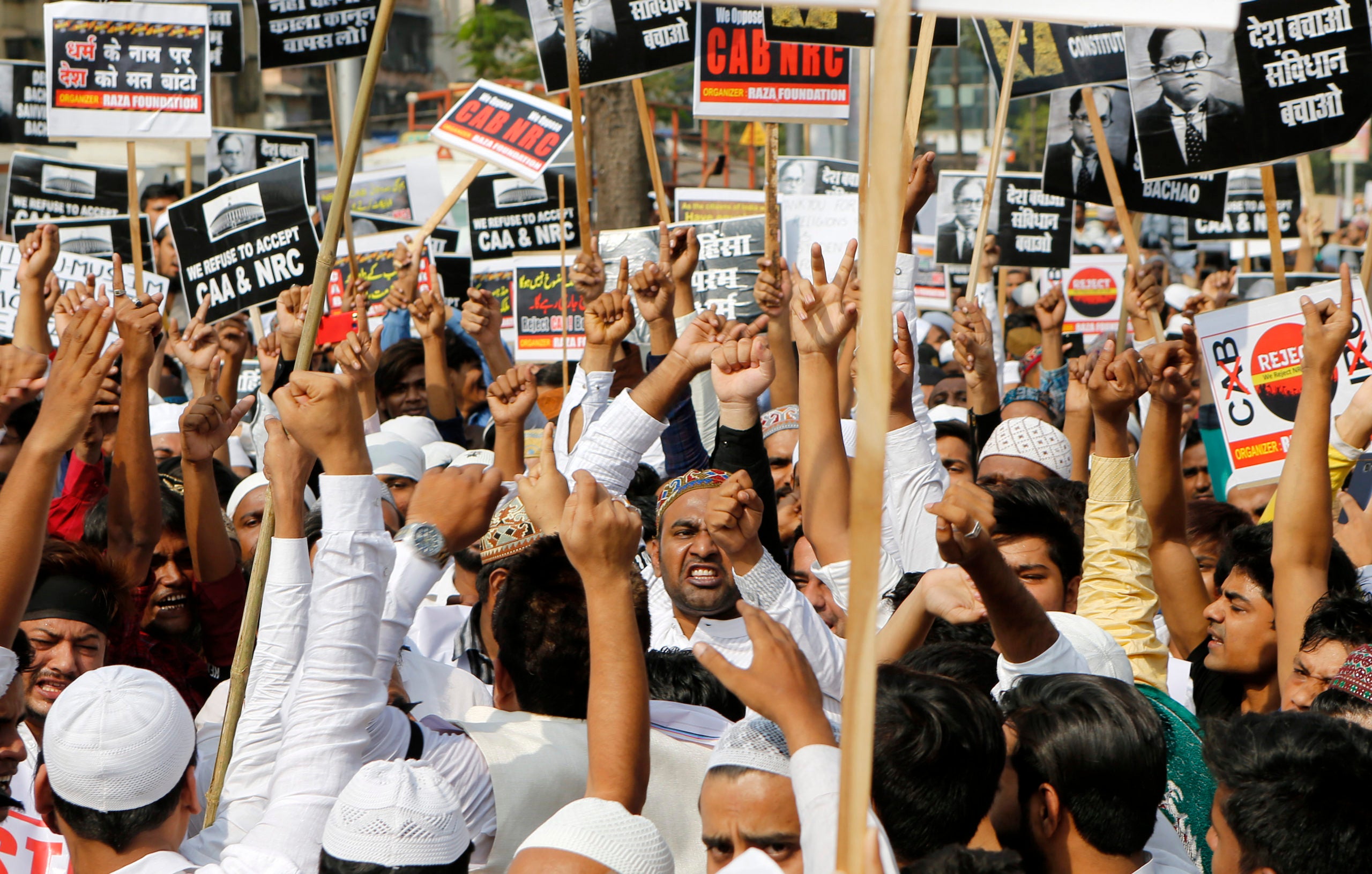 NEW DELHI (AP) — Police banned public gatherings in parts of the Indian capital and other cities for a third day Friday and cut internet services to counter growing protests against a new law that critics say marginalizes Muslims. Fourteen people have died so far and more than 4,000 have been detained, officials said.

Thousands of protesters stood inside and on the steps of New Delhi’s Jama Masijd, one of India’s largest mosques, after Friday afternoon prayers. They waved Indian flags and shouted slogans against the government and the citizenship law, which opponents contend threatens India’s secular democracy in favor of a Hindu state.

Police banned a proposed march from the mosque to an area near Parliament and sprayed protesters with water cannon blasts to prevent them from meeting up with more demonstrators about 4 kilometers (2 1/2 miles) away in central Delhi.

Much of the violence was in the northern state of Uttar Pradesh, where protesters set fire to police posts and vehicles and hurled rocks at security forces. The death toll rose to 14 after Avanish Awasthi, a spokesman for Uttar Pradesh, said late Friday that six people had died during clashes between demonstrators and police.

Most of the detentions also were in Uttar Pradesh, where more than 100 have been arrested and 3,305 detained since Thursday, said state police chief O.P. Singh.

Many of the protesters are angered by a new law that allows Hindus, Christians and other religious minorities who are in India illegally to become citizens if they can show they were persecuted because of their religion in Muslim-majority Bangladesh, Pakistan and Afghanistan. The law does not apply to Muslims.

Critics have slammed it as a violation of the country’s secular constitution and label it the latest effort by Prime Minister Narendra Modi’s Hindu nationalist-led government to marginalize India’s 200 million Muslims. Modi has defended the law as a humanitarian gesture.

In New Delhi, about 10,000 demonstrators outside Jamia Millia Islamia University collected signatures for a petition demanding the new citizenship law be scrapped. The university was the site of last weekend clashes in which students accused police of using excessive force.

The violence wasn’t limited to the streets. Surveillance video seen by The Associated Press shows police entering Highland Hospital in the southern city of Mangalore on Thursday night and using batons to disperse protesters who had taken shelter inside.

The video shows two policemen trying to kick open a hospital ward door and masked people running down a corridor. It also shows protesters throwing rocks at police and then barging into the hospital.

The protests began last week in the northeastern border state of Assam, the seat of a decades-old movement against migrants, and at predominantly Muslim universities and communities in New Delhi. But they have since grown to include a broad section of the Indian public.

A British colonial-era law banning the assembly of more than four people was in place in parts of the capital as well as in several cities in Assam and Uttar Pradesh.

Fears of an increase in immigration also are fueling the protests, and the law’s opponents include some Hindu conservatives in Modi’s Bharatiya Janata Party, who worry about more migrants in a country where public services for its 1.3 billion people are already highly strained.

“Some of the BJP’s own rank and file, the very people the party has sought to help, have come out against the law,” said Michael Kugelman, deputy director of the Asia Program at the U.S.-based Wilson Center.

Kugelman said the government’s failure to respond to the demonstrations, except to accuse political opponents of orchestrating them, is “likely to galvanize the protesters even more.”

The protests come amid an ongoing crackdown in Muslim-majority Kashmir, the restive Himalayan region stripped of its semi-autonomous status and demoted from a state into a federal territory last summer.

They also follow a contentious process in Assam meant to weed out foreigners living in the country illegally. Nearly 2 million people were excluded from an official list of citizens, about half Hindu and half Muslim, and have been asked to prove their citizenship or else be considered foreign.

India is also building a detention center for some of the tens of thousands of people the courts are expected to ultimately determine have entered illegally. Modi’s interior minister, Amit Shah, has pledged to roll out the process nationwide.

Critics have said the process is a thinly veiled plot to deport millions of Muslims.