Indiana attorney general: ‘I am not resigning my position’ 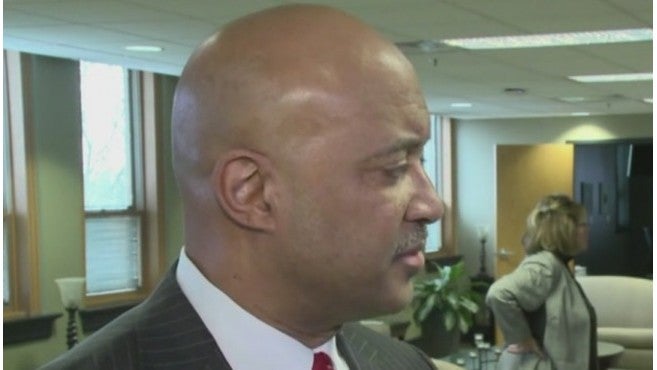 INDIANAPOLIS (WISH) — Attorney General Curtis Hill on Monday called allegations that he touched someone in an inappropriate manner during a legislative end-of-session party at a bar “deeply troubling” and “vicious.”

The state’s top four legislative leaders said on Monday they had completed an investigation into concerns expressed by General Assembly employees about Hill’s conduct at a “social gathering” at the end of this year’s legislative session on March 15.

Peg McLeish, communications director for the Marion County Prosecutor’s Office, said in a statement that to News 8 that no police investigation has been sent to it regarding the matter. If it were to become a Marion County criminal investigation, Prosecutor Terry Curry would be required to request a special prosecutor because of the attorney general’s role as counsel for all elected Indiana prosecutors. The attorney general currently represents the prosecutor’s office in two pending civil cases, McClish said.

Senate President Pro Tem David Long, a Republican from Fort Wayne; Senate Minority Leader Tim Lanane, a Democrat from Anderson; House Speaker Brian Bosma, a Republican from Indianapolis; and House Democratic Leader Terry Goodin, a Democrat from Austin, issued a statement Monday. It said they learned of employee concerns on May 14 and interviews were conducted with the employees. They also said they secured outside counsel for the investigation and that the concerns had been addressed with Hill’s office “to the satisfaction of the employees involved.”

The attorney general said he had not been contacted by any investigator or informed who made the allegations.

The statement from the lawmakers did not provide specific details about the nature of the concerns brought up by employees but said “House and Senate personnel policies strictly prohibit all forms of sexual harassment and clearly state that no employee should be subjected to unsolicited or unwelcome sexual advances or conduct, either verbal or physical.”

“On Monday, May 14, legislative leaders were first made aware of employee concerns regarding Attorney General Hill’s conduct at a social gathering at the closing of this year’s legislative session. House and Senate personnel policies strictly prohibit all forms of sexual harassment and clearly state that no employee should be subjected to unsolicited or unwelcome sexual advances or conduct, either verbal or physical. In accordance with House and Senate policies, interviews of those employees expressing concern were immediately conducted and outside counsel was engaged to be certain that the matter was handled properly and thoroughly. Our investigation has been completed and the matter has been addressed with the Attorney General to the satisfaction of the employees involved. Protection of House and Senate employees is of paramount importance to legislative leaders.”

“These allegations are deeply troubling. Following dinner, I was invited to AJ’s lounge for the legislative end of session party. The celebration at AJ’s was very crowded with, legislators, lobbyists, staffers and others. The atmosphere was light and jovial, as would be expected in a bar. I interacted with several people – talking, laughing, and telling stories. At no time was my behavior inappropriate nor did I touch anyone in an inappropriate manner. While the celebration continued, I left with the gentleman who had invited me and went home. I have never been contacted by any investigator. I have not been informed of who made these allegations nor have I been provided any due process with regard to these vicious allegations.”

A native of Elkhart and a graduate of Indiana University-Bloomington, Hill became attorney general Jan. 9, 2017, after his election in 2016. According to his biography, more than 1.64 million Hoosiers cast ballots for Hill, making him the top vote-getter of any elected official in Indiana history.

The lack of due process regarding the prejudicial investigation is concerning. I have never received a copy of this ‘confidential’ report along with the specific allegations against me. While meeting with legislative leaders yesterday I requested a copy of this report but my request was denied despite the fact that the legislature acknowledged they had given it to the media. There is a fundamental lack of fairness to this entire process.”

“The lack of due process regarding this prejudicial investigation is deeply troubling. I first learned about this investigation on Friday, yet I was never contacted by an investigator, met with legislators on Monday, had requested a copy of the ‘confidential’ report that had been provided to the media, and have been denied access to the report. Now I am being asked if I intent to resign based up on this prejudicial investigation. Let me be clear, I am not resigning my position as Attorney General. The people of the State of Indiana have given me the highest honor to have elected me with overwhelming support to the position of Attorney General. I will continue to honor my commitment to the citizens of this great state.”

“I’m in a remote area of Montana with Janet celebrating our anniversary for a few days. I have limited information from media sources I’m able to access.

“We took great care to update our sexual harassment policies for the executive, legislative and judicial branches in the past few months. No one should be subjected to unwanted sexual advances. I commend House and Senate leaders for their immediate and formal follow up to the allegations presented to them.

“I’ll return to Indianapolis late tomorrow night. Until I’ve reviewed the facts in detail, I will have no further comment.”

“I am continuing to learn about the details of the investigation into allegations against Attorney General Curtis Hill. I appreciate that Speaker Bosma and President Pro Tem Long acted promptly to look into the allegations, and that they acted in a bipartisan manner with Democrat legislative leadership to name an independent counsel to investigate.

“It’s important to be clear: As the Republican Party, we have zero tolerance for sexual harassment, and that’s the standard to which we all should adhere. Actions like these alleged have no place in public life or anywhere else.”

“Like Governor Eric Holcomb has previously stated, Hoosier Democrats agree that there’s ‘zero room for harassment of any kind in any state government workplace.’ These actions are never acceptable. We believe the multiple allegations aganist the Attorney General are serious, and raise material doubts over whether he can effectively carry out the duties of his office. Hill is Indiana’s chief law enforcement officer. It is not only his job to carry out the laws passed by the Indiana General Assembly, but also to protect Hoosiers from waste, fraud and abuse. The allegations reported yesterday are beyond troubling and wildly inappropriate in a professional or social environment for any person, much less a statewide elected official charged with such responsibility. Attorney General Hill should spare Hoosiers from this controversy and resign from office.”

“When allegations against the Attorney General were first brought to my attention, I immediately supported my fellow leaders in conducting an investigation and pursuing legal advice as needed to protect and defend our staff. The investigation was implemented quickly and taken seriously, with the utmost importance placed on the confidentiality of our staff, at their request.

“The Attorney General’s behavior was totally reprehensible and certainly calls into question his ability to carry out his duties as the chief law enforcement officer of the state. The office and duties of the Attorney General call for the highest levels of ethics and unquestionable character and I believe Curtis Hill falls completely short of that standard.

“With that in mind, it is my belief that Curtis Hill can no longer adequately represent the best interest of Hoosiers nor effectively carry out his role and should resign from his position as Attorney General of Indiana.”