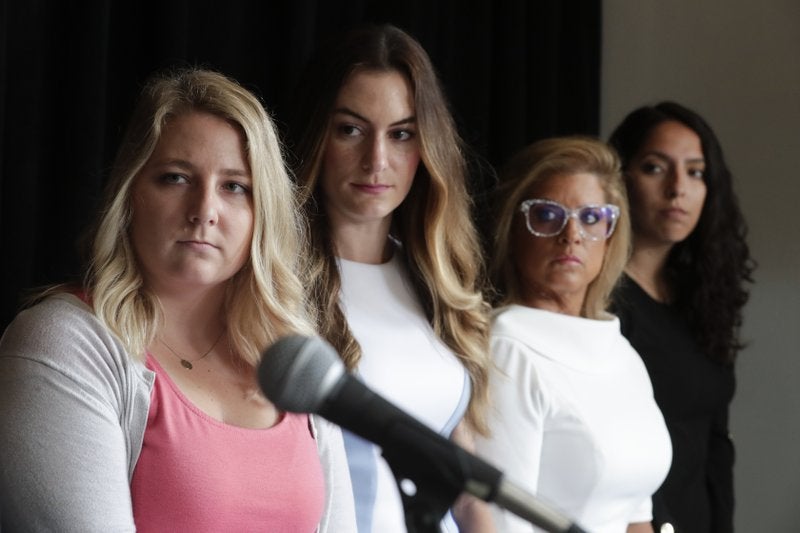 INDIANAPOLIS (AP/WISH) — Indiana’s attorney general is being sued in federal court by four women who say he drunkenly groped them during a party last year.

The women and their lawyers announced the lawsuit against Republican state Attorney General Curtis Hill during a Tuesday news conference. The women’s lawyers said in October that they intended to sue Hill after a special prosecutor declined to pursue criminal charges against him.

The 39-page federal lawsuit filed Tuesday in Indiana’s Southern U.S. District court outlines all of the claims against Hill and the state of Indiana.

Hill is accused of touching the backs or buttocks of a state lawmaker and three legislative staffers in March 2018 at an Indianapolis bar.

“We don’t want to be here. We didn’t want this to happen. We didn’t want this circus. But, here we are. Certainly when you’re talking about threatening behavior, subsequent to somebody putting their hand down my dress, yes, there have been certainly times when I feel unsafe,” Candelaria Reardon said.

Gabrielle McLemore, communications director for the Indiana Senate Democrats, fought back tears Tuesday morning as she talked about how much of a struggle it is at work since the allegations went public.

“It’s a huge distraction, sorry,” said McLemore. “It makes it really difficult to do your job. When people are blaming you for not having a celebration, as is custom. Reminding you that that event took place. I’m at my workplace; I’m trying to do a job.”

According to the lawsuit, Niki DaSilva, a legislative assistant with the Indiana Senate Republicans, was so fearful Hill would retaliate against her while at work that she locked herself in her office every day for more than a month.

“Right, wrong or indifferent, I had this fear that there might be, any day, he might just walk in or have somebody else walk into my office,” DaSilva Tuesday. “So, for a long time, that was fairly traumatizing to me.”

This past year was Samantha Lozano’s first year on the job at the Statehouse.

“I’m here because I know what I experienced was wrong, and I simply want people to know that this is not the right way for us state employees to be treated.”  said Lozano, who works as a legislative assistant with the Indiana House Democrats.

The Office of the Attorney General on Tuesday evening released the following statement:

Attorneys from the Office of the Attorney General filed their appearances to defend vigorously the State of Indiana and the Attorney General in a lawsuit filed today captioned DaSilva, et al. v. State of Indiana, et al. The lawsuit is related to allegations that have now been reviewed four times. The investigations all concluded without any recommendations for further action.

This latest legal action will be addressed in the court and through the proper procedures as established by law.

Under Indiana law, the Office of the Attorney General shall defend all suits instituted against the state and its officials.

Hill faces an October hearing on possible sanctions from the Indiana Supreme Court, which could include up to disbarment as an attorney.

Three of the four women and their attorney also appeared on Daybreak Wednesday to answer questions about their lawsuit.