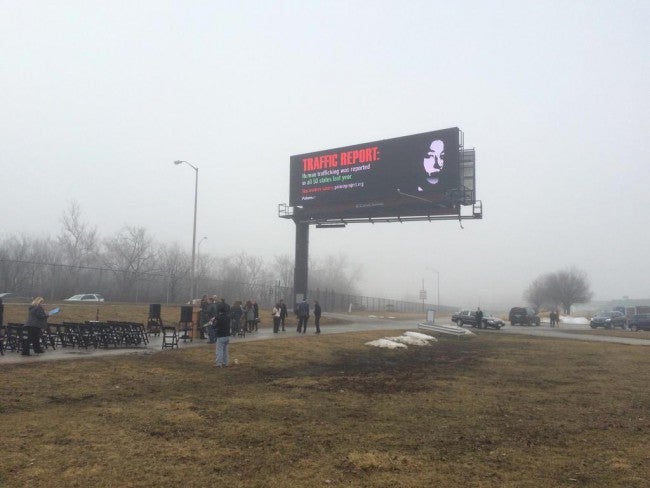 The billboards are the result of a collaborative effort between Indiana Attorney General Greg Zoeller, advertisers and anti-human trafficking groups. They say the goal is to spread awareness of the crime.

Zoeller was at the state fairgrounds Wednesday where one of the billboards is located. He said more can be done to break down the lucrative trafficking industry.

“There needs to be more recognition that this is not a voluntary activity on the part of young girls,” Zoeller said. “Primarily, they’ve already been abused and now they’re being trafficked.”

Some of the ads include statistics. One states that human trafficking was reported in all 50 states last year.

Others provide tools for witnesses and victims: a phone number for the National Human Trafficking Resource Center, or a web link for Polaris; the anti-human trafficking group that contacted Zoeller.

“We want to let survivors know that help is available and give them that phone number,” Polaris CEO Bradley Miles said. “We want to let the public know that this is an issue 356 days a year, much bigger than people realize.”

The ads will be up through April 6. Organizers are hoping to spread the word not just to locals, but to visitors traveling to Indiana for the NCAA Final Four.

The advertising companies involved are donating the billboard space for free.

Victims of human trafficking can find help through Polaris or Restored, another group involved in the billboard project.

The number for the National Human Trafficking Resource Center is 888-373-7888.