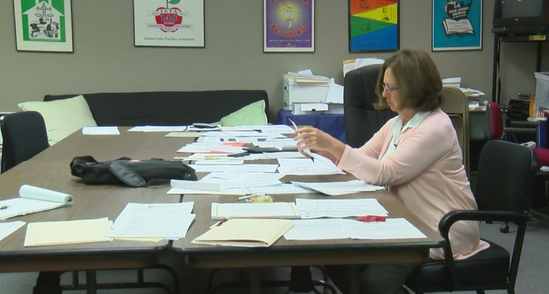 INDIANAPOLIS (WISH) — It was this time in 2016 that a startling study hit the headlines from the Learning Policy Institute: Indiana ranking in the bottom five states for teacher recruitment and retention.

The good news is many local districts are now planning well in advance to fill those teaching positions, but say they’re still struggling.

Kent DeKoninck is the superintendent of Greenwood Community Schools. He reported 20.5 open teaching positions this summer, with one industrial technology teaching position opening up just this week. Assistant Superintendent  Andy Cline from the Nineveh-Hensley-Jackson United School Corporation, or Indian Creek schools in Trafalgar, reported 13 openings in his staff of 113 certified educators.

The good news? Dekoninick said all but the recent industrial technology position has been filled. He attributed part of the success to the community in Greenwood, conveniently located just 20 minutes south of downtown Indianapolis. The story can be very different in more rural parts of the state.

“We’ve had individuals who have been great candidates who have taken the position,” Cline said, “and given it up because something closer to home came up.”

Cline said his teachers drive into Tragalfar from Bloomington, Columbus and Indianapolis. Due to some pre-emptive hiring in the spring, Cline said 12 of the 13 open positions are filled. But it took a lot of work and planning.

“It’s become a chess game,” he said. “It’s much different than even six years ago, five years ago where we could post a position and you’d have 25 applicants for a math position. Now it’s not that easy.”

So why is it so hard to keep teachers or hire new ones? Both administrators said public policy, poor state testing assessments, lower salaries and a lack of regard for teachers are leading to fewer students picking the major.

“We do have a shortage, and it’s just going to continue to get worse, not better,” DeKoninck said.

Cline serves on an advisory board with the Indiana University School of Education in Bloomington that helps channel its education graduates into school districts in need around the state. He said a potential solution for the teacher shortage ironically starts back in the classroom, bringing more students into education as a career.

“I think that the Department of Education and even the universities, whether it’s Indiana State or IU Bloomington, they’ve already tried to get out and are out in front of this,” he said. They’re “working with school districts and advisories, or reaching out to individual districts to learn what we need to use to market and attract new teachers or new teacher candidates to the districts in Indiana.”

As for what administrators do if they simply can’t fill a teaching position, they said, they have several options, including turning a licensed substitute full time, rehiring a retired teacher or even finding someone who will pick up an “emergency license” that’s just valid for a year.

But the superintendent staff members admitted, those fresh teachers have a lot to learn for themselves, all while trying to effectively educate students.