Indiana couple expecting conjoined twins: ‘Why not us?’ 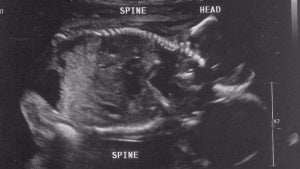 FORT WAYNE, Ind. (WANE) – When Abby Hickman and Cameron Logan found out they were pregnant with twin girls in April, they were ecstatic. A rarity in itself, the parents couldn’t believe their luck.

Then, they found out their babies were more connected than they could have ever imagined. The girls are conjoined twins, which is extremely rare. Since the babies share certain body parts and organs, their births are often risky and their lives are typically full of health complications. Even with the diagnosis, Abby and Cameron said they can’t wait to meet who they’re calling “their two little princesses.”

“I’m excited. I mean no matter what happens, we’re going to have our little girls and it’s just exciting,” Abby said.

Inside Abby Hickman’s womb are two identical twin girls with 20 fingers, 20 toes, and one heart.

Already mom and dad to three young boys, parenting is nothing new for this couple.

“They’re crazy. They’re so much fun. I didn’t really know what to expect, but it’s a joy having boys,” Abby said. “Seth, he’s six. He’s quiet and sensitive. Ian, he’s ornery and crazy. He’s five. Then, Sam, he just turned one. I feel like he’s so much older than he is because of the way he acts.”

Adding a set of twin girls into this family, though, will soon put braids and bows over trucks and trains.

“Ever since we found out they were twins, I just wanted girls. I can’t even describe it, after three boys, just someone to do their hair or girl stuff, you know,” Abby said.

Abby and Cameron found out they were having twins in June, but the ultrasound only showed one heartbeat. A few days later, a specialist told Abby and Cameron the twins were conjoined.

“You just want your kids to be safe and you want them to grow up healthy. Just knowing that they’re not always going to be there possibly, there’s that chance that they’re not going to make it. Being a parent, you want to do everything you can to have them. It’s just scary,” Abby said.

The girls bodies are connected from the upper chest to the lower stomach, but each have their own set of arms and legs. It’s called thoracopagus twins. Nearly 19 percent of conjoined cases fall under that category. As of right now, doctors know the twins share a heart, meaning separating the girls will never be an option.

“You don’t really see these cases that much, so you don’t know what to expect and you just hope for the best, but prepare for the worst,” Cameron said. “It’s stressful, very stressful. Just worrying about their health and safety, her safety. You just don’t know what to expect every doctor visit you go in to. You know it’s going to be a long journey, but you just pray for the best.”

“We try to remain positive because our kids are looking at us, and we have so much support that being positive has been easy. No matter what, we’re going to love them and live their life however we can, that’s what is important. Give them the best that we can offer,” Abby said.

35 percent of thoracopagus twins don’t make it past the first 24 hours of life. It’s a statistic that understandably concerns Abby and Cameron.

“Just getting past the first day is probably going to be the roughest knowing that it’s 35 percent, but we look forward to the seeing what this journey is going to bring and seeing our daughters,” Cameron said.

Even with the intimidating prognosis, recent tests show the girls are growing at a promising rate.

“As far as growing-wise, they’re on schedule. They’re like they should be. Everything is normal, well, as normal as it can be,” Cameron said.

Abby and Cameron are trying to keep the pregnancy as traditional as possible, too. So much so, they’re already debating over names.

“We’re kind of keeping them secret. We haven’t picked anything out for sure, but we have a few. We don’t really agree on all of them,” Abby said.

Abby and Cameron started a Go Fund Me page to share updates with family and friends, but strangers have already donated to help the family deal with growing medical expenses.

Through their research on other cases of thoracopagus twins, Abby and Logan have found one family in Philadelphia and several other sets of twins overseas. They said the support from the Go Fund Me page has been overwhelming.

“The first day we put our page up, we had 1,200 shares. Just seeing that kind of support from family and friends, it’s unreal. Even people we don’t know are reaching out to us. Our families have been through it the whole time, and then just having other people see it and just be there not even knowing us is just amazing. We didn’t really know how sharing it would go and then after even the first day, we were shocked to see how many supporters we had and just everybody that shared our story and told us they were praying for us and keeping us in their thoughts, it was amazing,” Cameron said.

“I was trying to reach out to maybe other moms that have had similar experiences because even though I’m going through it with everyone, I need someone there that’s kind of gone through similar stuff,” Abby said. “We’re really strong, I feel like, and we have a strong support system, and that helps, and why not us, you know? I never thought that two babies that aren’t even here yet would get so much love and support and attention. Just being so cared about with doctors and just everyone really.”

Abby’s due date is January 3, 2016, but doctors expect her to deliver at least two weeks early.