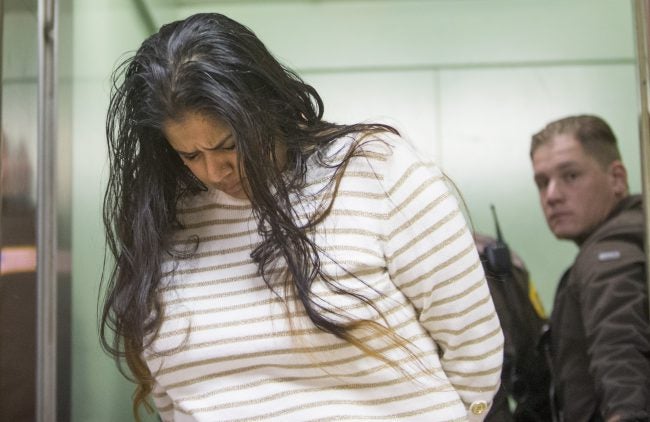 INDIANAPOLIS (AP) – Indiana appeals court judges grilled an attorney for the state Monday over whether there was evidence a woman found guilty of neglect and feticide in a self-induced abortion knew she had given birth to a live child.

During a hearing on Purvi Patel’s bid to have her convictions thrown out, Judge L. Mark Bailey asked whether evidence at trial showed the 35-year-old northern Indiana woman knew she had delivered a live, premature child that would need immediate medical care.

Deputy attorney general Ellen Meilaender, who presented the state’s arguments, replied no, saying Patel claimed the “baby was dead” when she delivered it in 2013 after ingesting abortion-inducing drugs she bought online.

The state argues that Patel’s infant was at least 25 weeks into gestation, just beyond the threshold of viability, and had taken at least one breath before dying.

Judge Nancy Vaidik asked Meilaender how the state can defend Patel’s conviction on a charge of neglect of a dependent resulting in death if there was not conclusive evidence the child was born alive and needed medical care.

“You can’t endanger a dead baby, can you?” Vaidik asked.

Meilaender pointed to the presence of the baby’s blood in a bag Patel placed the child in as evidence the infant’s heart was beating when it entered the bag, which was found in a trash bin behind her family’s restaurant.

Patel, of Granger, received 20 years in prison on the neglect charge last year and six years on the feticide charge, with the sentences to run at the same time.

Her appeal contends prosecutors failed to prove she knew she had delivered a live baby boy or that she could have done anything to save his life. It argues that summoning medical help would have been “futile,” citing a forensic pathologist’s testimony that the infant likely would have died from bleeding within about a minute after Patel cut the umbilical cord.

One of Patel’s attorneys, Stanford University law professor Lawrence C. Marshall, told the court that even if Patel would have tried to clamp the umbilical cord after cutting it, that “would have slowed things down just a bit but wouldn’t have made any difference.” Marshall said that explanation came from trial testimony.

He said the charges against Patel are not supported by the evidence in the case.

The appeal also says Indiana’s feticide law was “passed to protect pregnant women from violence” that could harm their developing fetus, not to prosecute women for their own abortions. The state argues that the law “is not limited to third-party actors” and can apply to pregnant women.

Patel was arrested in July 2013 after she sought treatment at a local hospital for profuse bleeding after delivering a 1½-pound infant boy and putting his body in the trash bin behind the restaurant. Court records show Patel purchased abortion-inducing drugs online through a pharmacy in Hong Kong, took those drugs and delivered a premature baby in her home bathroom.

Court records say Patel, who lived with her parents and grandparents, feared her family would discover she had been impregnated by a married man.

Judge Vaidik told attorneys for both sides Monday that they had given the three appeals judges “a lot to think about” and that the court would rule as soon as it can.

At least 38 states have fetal homicide laws, according to the National Conference of State Legislatures. But the Patel case was the first time a state feticide law was used against a woman specifically because of “an alleged self-induced abortion,” said Jill E. Adams, executive director of the abortion rights advocacy group Center on Reproductive Rights and Justice.

Indiana’s feticide statute, enacted in 1979, made it a crime to “knowingly or intentionally” end a pregnancy with a goal other than to produce a live birth or to remove a dead fetus. The law does not apply to abortions performed in compliance with Indiana’s abortion statutes.

This story has been corrected to show that Judge L. Mark Bailey, not Judge Nancy Vaidik, asked whether evidence was presented at trial that Patel knew she had delivered a live child.