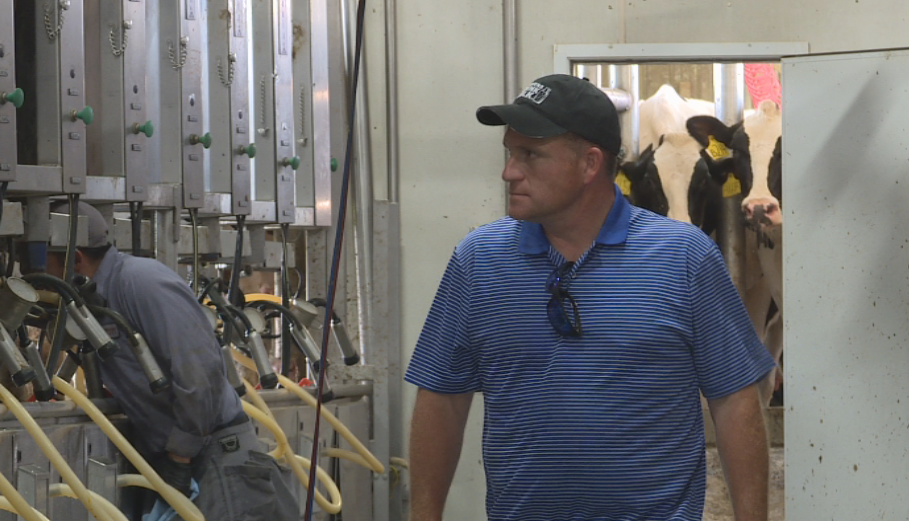 However, even as profits slowed to a trickle for hundreds of Hoosier dairy producers, a lifelong farmer in Whiteland – a town of approximately 4,000 located 20 miles south of Indianapolis – said his faith in the resilience of Indiana dairy had yet to run dry.

Joe Kelsay, a sixth-generation dairy farmer, told News 8 he remained hopeful about the future of his family farm.

Kelsay Farms, a sprawling estate east of I-65, was originally land granted to the family in the 1830s by President Martin Van Buren.

“It really becomes a labor of love and a tradition that is passed from generation to generation,” Kelsay said, explaining how their dairy and crop operations fed his sense of purpose and shaped his identity.

“The way that we can convert sunshine and rain through God’s gift of the earth into food for people is a really rewarding enterprise,” he told News 8. “But the reality of agriculture is that you don’t have much control over the ups and downs. It’s going to happen.”

Years of cycling through periods of success and relative hardship had desensitized him to the anguish of temporary market downturns, he said, and taught him to focus on factors within his control.

“I’ve seen some of these things come and go before,” Kelsay said. “But if we were to characterize the dairy industry today, it’s in a bit of turmoil, to be perfectly honest.”

He opened up about the shock of losing a contract this spring with Dean Foods, a buyer they had maintained a relationship with for 25 years, but said he remained confident they would bounce back.

More than 50 dairy farms across Indiana have closed since January and hundreds more are teetering on the brink of bankruptcy, according to Doug Leman, executive director of Indiana Dairy Producers.

Leman, who previously owned and operated a Francesville dairy farm, said massive overproduction was a key culprit in the current plight of the industry.

“We have some really good dairy producers [in the United States],” he said. “Maybe a little too good. I would say we’re currently milking probably 300,000 too many cows in the U.S.”

Leman noted the spike in production as early as 2014, after milk prices hit an all-time record high of more than $23 per hundredweight.

A brief period of early market recovery was swiftly interrupted last month by retaliatory tariffs and policy changes imposed by countries including Canada, China and Mexico.

“If things don’t change, I’m afraid of what we might see,” Leman told News 8. “It’s really getting to what I would call a ‘breaking point’ for a lot of farms.”

Kelsay said he refused to let financial woes break his resolve or his commitment to a family legacy.

“I have full faith and confidence in this industry,” he declared. “There are ups and downs in any industry; and in life.”