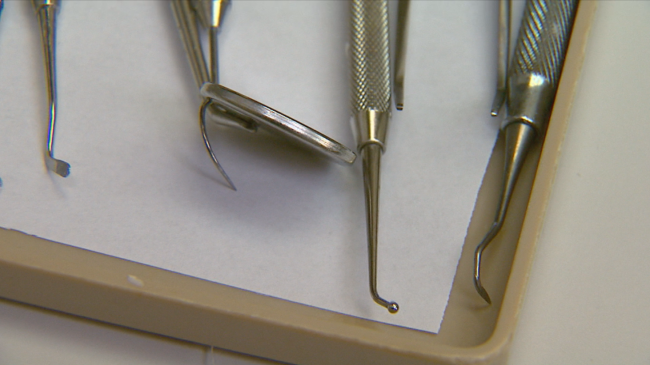 INDIANAPOLIS (WISH) — An Indiana dentist accused of performing unnecessary procedures and overbilling Medicaid will face a disciplinary hearing before the state board of dentistry later this week.

The disciplinary hearing, scheduled for Friday before the state board of dentistry, comes after his initial hearing in June was continued.

Dr. Shadrach Gonqueh, the owner of Amazing Family Dental in Indianapolis, is accused of overbilling Medicaid for multiple procedures performed on 158 patients, according to a licensing complaint filed by the Indiana Attorney General’s Office.

The complaint, which reviewed Gonqueh’s Medicaid transactions between 2012 and 2014, states that he received more than $27,000 in Medicaid reimbursements during that time period. He’ll face a disciplinary hearing Friday morning before the Indiana State Board of Dentistry.

According to the complaint, Gonqueh allegedly “obtained payment from the Medicaid program by means of a false or misleading oral or written statement or other fraudulent means as evidenced by his pattern of billing Medicaid for multiple services when only one service could be properly billed.”

The complaint goes on to state that Gonqueh’s actions resulted in overpayment of $27,372.98.

The Indiana Attorney General’s office filed that complaint in March of this year.

But an I-Team 8 investigation found there have been well-documented allegations, malpractice lawsuits and consumer complaints dating back to 2012 that accuse Dr. Gonqueh of performing unnecessary procedures. Some patients claim he removed dozens of their teeth unnecessarily or performed procedures that were not warranted.

The current licensing complaint does not address any of those issues.

“By the time we got a consumer complaint – see, our office wouldn’t have the authority to go to the (State Board of Dentistry) until we had that, and then once we started to investigate and find say let’s say – additional harm – then I think it was appropriate. But we have to work with the board and ask them ‘What type of case would like? Is this the type of case where we should seek a summary suspension?’ So it’s not exactly like a court where we are the prosecutor and make those determinations. We work with the board. These are professionals and they usually send someone to review with us and then we have to make the collective decision on what charges to bring and what the board wants to hear.”

When asked to confirm that despite the past complaints and allegations that neither the board nor the attorney general’s office had sought to suspend Gonqueh’s license, Zoeller said: “That’s right.”

Nicholas Goodwin, a spokesman for the board, said that while the board may confer with the attorney general on cases, Zoeller’s office has the ultimate say on which charges are presented.Consumer Complaints

Through a series of open records requests and interviews with former patients, I-Team 8’s investigation uncovered consumer complaints that have been filed with the Indiana Attorney General’s Office against Dr. Gonqueh.

The most recent was filed last month by the board of dentistry based on our original report.

It states: “WISH-TV aired a story… indicating Dr. Gonqueh has been billing for dental procedures not performed and scaring patients into having treatment in the form of extractions that may not be necessary by telling them they will have a heart attack and die if they do not have the teeth removed.”

Our report chronicled the account of former patient Kyong Farnsley.

During a 2012 visit to Dr. Gonqueh’s office, Farnsley says Gonqueh told her she needed to have all of her bottom teeth extracted in order to save her from a potentially deadly infection.

“He said the infection was so bad, that if I didn’t have them pulled out, I could walk out and have a heart attack and die,” Farnsley told I-Team 8 during a recent interview. “It’s very traumatic to have all your teeth pulled out at once.”

The active malpractice lawsuits against him and his practice, Amazing Family Dental, claim his office engaged in artifice “to make its patients believe that they were in imminent danger and needed to immediately have all their teeth pulled and replaced with dentures or else risk suffering permanent damage to their cardiovascular system and/or risk death by suffering a heart attack.”

The board filed a similar complaint against Gonqueh in April of 2013.

The complaint reads: “It is the board’s belief that Dr. Gonqueh has not kept up with the standards of care in his dental practice as evidenced by pulling 32 teeth from a patient without the consent of the patient.”

Neither of those complaints filed by the board resulted in any sanctions against Gonqueh, according to I-Team 8’s review of minutes from five years worth of dental board hearings.

A third consumer complaint was filed by former patient Aaron Pacentine in May of 2013.

Pacentine’s dental records, which he shared with I-Team 8, show that he went to Gonqueh’s office in March of 2013 complaining of some pain in one tooth. His records note that an exam by “Dr. G” revealed “nothing too suspicious with #3 except that the tooth has an existing large filling in it, but no decay was noted.”

A proposed treatment plan from Gonqueh’s office recommended he received $1,300 worth of work. His records show he received at least 10 fillings over the next two visits, March 11, 2013 and March 20, 2013.

As a disabled filmmaker with a cognitive disorder, Pacentine told I-Team 8 he was worried he would not be able to pay for it.

“They were like, ‘You’re a Medicaid patient and we’re taking care of it,’ so it’s going to be fine,” Pacentine said.

After receiving his treatment there, Pacentine said less than a month later he went back to his original dentist in South Carolina, who noted in his chart that the “patient had 10 amalgam fillings placed with severe over hangs.” The dentist recommended that the fillings be replaced.

“I was basically told that I didn’t have any cavities at all and they messed up some of my teeth in the process, so that was just not good,” Pacentine said.

It was then, in May of 2013, that Pacentine said he filed a consumer complaint with the attorney general. But after 10 months of exchanging emails with a deputy attorney general handling his case, he received another email telling him that his case was being closed because a faculty member at the IU School of Dentistry “reviewed your records from both Dr. Gonqueh and in South Carolina. He could find no evidence whatsoever that the restorations placed by Dr. Gonqueh were placed improperly.”

But during a brief telephone interview in April, Gonqueh told I-Team 8 that “this story is nothing new, and I will refer you to my attorney for any further comments. I think you are looking for something where there is nothing.”

At the time, Pogue released a statement defending the dentist’s treatments as “medically appropriate.”

The full statement reads as follows:

In the days leading up to our first story, Eslinger made repeated calls and emails to I-Team 8 and later released a separate statement that said, in part, that “expert witnesses” contend that Dr. Gonqueh did nothing wrong.95 Indiana dentists flagged with ‘questionable billing’

Dr. Gonqueh is also among 94 other Indiana dentists listed in a federal report as having “questionable billing” practices.

The report was released in November by the Office of Inspector General from the U.S. Department of Health and Human Services.

In it, federal inspectors note that “our findings raise concerns that certain providers may be billing for services that are not medically necessary or were never provided. They also raise concerns about the quality of care provided to children with Medicaid. Although our findings do not prove that providers either billed fraudulently or provided medically unnecessary services, providers who bill for extremely large numbers of services warrant further scrutiny.”

The report itself does not identify those dentists, but supporting documents obtained by I-Team 8 through a Freedom of Information Act request show that Dr. Gonqueh is among the 95 dentists investigated.

“Notably, two-thirds of the general dentists with questionable billing worked for four dental chains in Indiana,” the report states. “A concentration of such providers in chains raises concerns that these chains may be encouraging their providers to perform unnecessary procedures to increase profits.”

As of April 2, 2015, those dentists and an oral surgeon, whose names are listed in the PDF viewable in our previous report, were under investigation by the U.S. Department of Health and Human Services Office of the Inspector General. The list has been turned over to the Centers for Medicare and Medicaid Services, but a spokeswoman would not confirm or deny the existence of its investigation.Medicaid director: Some dentists cleared of wrongdoing

A number of the dentists named in the federal report remain under investigation by state and federal agencies.

The problem is that it’s not clear how many remain under investigation.

Indiana Family & Social Services Administration has said that “some” of the dentists on the list have been cleared of wrongdoing.

“We can’t speak to the specifics of the list or how many are under investigation, but what we can say is that some have been cleared,” said Joe Moser, Indiana’s Medicaid director.

Moser told I-Team 8 that some of the dentists named warrant further scrutiny but that others were “flagged inappropriately” by federal investigators because they misunderstood Indiana’s Medicaid policy, which allows — as Moser poined out — for several hygienists in one clinical setting to bill Medicaid for several procedures using a single dentist’s provider number.

When pressed further for a figure, Moser acknowledged that “some” of the dentists remain under scrutiny by the state. Moser said that he “could not identify the number for you do to ongoing nature of the scrutiny that we are providing to them.”

Moser did provide I-Team 8 with a copy of a cover letter sent to the Office of Inspector General, noting that the state has sought to increase oversight through performing desk audits and onsite visits.

“Providers have been asked to justify prior billed claims, especially with respect to behavior management. Often providers have identified sufficient practices and safeguards to ensure compliance. Providers who have not done so have been re-trained on correct billing practices and, in some cases, subject to further scrutiny,” the letter states.

It goes on to say that “as issues are identified, appropriate action has been taken pursuant to Indiana’s program integrity procedures.”