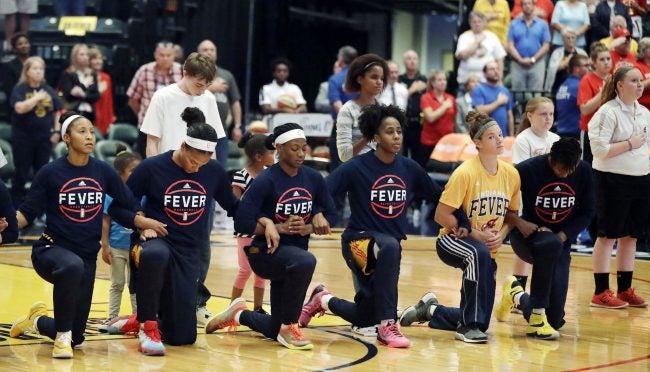 INDIANAPOLIS (WISH) — A movement started last month to draw attention to racial oppression and inequality made its way to Indianapolis last night.

The entire Indiana Fever team took a knee during the national anthem at Bankers Life Fieldhouse.

This movement was started in August by San Francisco quarterback Colin Kaepernick, but this is the first time a team as participated as a whole.

The story is getting a lot of attention on social media. Many people say they disagree with the team’s actions.

Glad I can save money now by not buying @IndianaFever tix. Go out into the streets/police stations & talk. Not standing is the easy way out- Shane Savage Leisure (@shane_leisure) September 22, 2016

Others say they support the team and the peaceful way they choose to protest.

To the women of the Indiana Fever – you are awesome! Bravo! More athletes need to show the same courage of their convictions! #Fever– Peter Spellos (@pspellos) September 22, 2016

During the Indiana Fever versus Phoenix Mercury playoff game last night, the Fever players conducted a silent protest by kneeling during the singing of the National Anthem.  While Pacers Sports & Entertainment believes that our players should follow WNBA protocol, which is to stand respectfully during the anthem, we also understand that they have the right to have their voices heard.  We are very proud of our role in serving the community in Indianapolis and it is our hope going forward that we can collaborate with the players in a positive way, create opportunities for meaningful discussions, and contribute to a stronger, safer and more unified community.”

If you want to join in on the conversation head to our Facebook page.