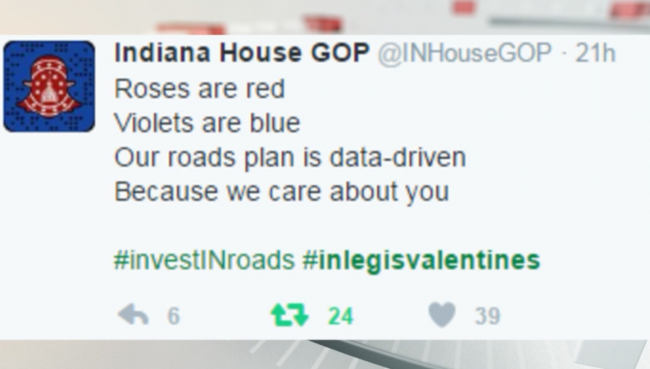 INDIANAPOLIS (WISH) – As Indiana lawmakers debate a road funding bill, some took to social media to use Valentine’s Day as a selling point.

“Roses are red, grass is green, if you don’t support our road plan I think you are mean,” Indianapolis resident Zach Ross recited a tweet from Indiana House Speaker Brian Bosma.

“Roses are red, violets are blue, we have a plan to pay for roads with no new taxes for you,” State Rep. Dan Forestal (D – Indianapolis) recited a tweet from the Indiana House democrats.

“Roses are red, violets are blue, look at HB 1002 with dread, taxes and tolls on you,” Greenwood resident Ted Brown recited a tweet from a group being enoughINtaxes.

“Roses are red, violets are blue, our road plan is data driven because we care about you,” State Rep. Jack Jordan (R – Bremen) recited a tweet from Indiana House republicans.

Those are some of the poems aimed at a road funding bill to generate a billion dollars a year. On Tuesday, the Indiana House debated it for the first time.

If signed into law, the price at the pump would go up, and vehicle fees would be added. A proposal that legislators say deserves attention.

“I think the creative genius of the senators,” Ross said. “I’m glad to see, and the representatives, that they’re creativity is alive and well.”

“I mean, it’s just, Valentine’s Day, holidays are not to advertise for political reasons,” Brown said.

Valentine’s Day poems are timely, but not the only road funding campaign. Right now, republicans are asking Hoosiers to take photos of potholes and upload it to social media.

At the same time, gas stations across the state are getting ready to put signs at pumps alerting neighbors about the potential spike. As the road bill makes it way through the state house, don’t expect the campaigns to end with Valentine’s Day.

“I think we take things way too seriously, and I think it’s a great way to interact with the people of Indiana,” State Rep. Jordan said.

“I think we’re going to see a lot more campaigning on social media,” State Rep. Forestal said. “It is the new way to reach people.”

The road funding bill is expected to voted on Thursday in the Indiana House. If signed into law, republicans said Hoosiers will spend $60 more a year in gas and fees.

More of the tweets read:

Roses are red
Violets are blue
Look at HB 1002 with dread
Taxes and tolls on you!#inlegisvalentines– enoughINtaxes (@enoughINtaxes) February 13, 2017

Roses are red,
Violets are blue,
We have a plan to pay for roads
with #NoNewTaxes for youhttps://t.co/zJeeiLtUP0#inlegisvalentines– Indiana House Democrats (@inhsedems) February 13, 2017

Roses are red, grass is green, if you don’t support our roads plan I think you are mean #inlegisvalentines– Brian Bosma (@Brian_Bosma) February 13, 2017

Roses are red
Violets are blue
Our roads plan is data-driven
Because we care about you#investINroads #inlegisvalentines– Indiana House GOP (@INHouseGOP) February 13, 2017

Roses are red,
Violets are blue,
We can’t wait ’til March
To work on House Bill 1002.#inlegisvalentines– INSenateRepublicans (@INSenateGOP) February 13, 2017