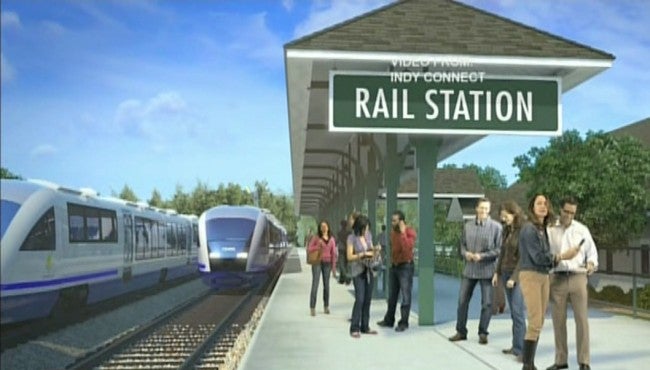 INDIANAPOLIS (WISH)- Could light rail roll on in to Indiana? One state lawmaker wants it to be an option on the table.

Lawmakers on Tuesday signaled their support for the idea in a bill heard in a hearing of the Senate Committee on Homeland Security and Transportation. The bill would repeal the prohibition that prevents certain counties from purchasing, leasing, acquiring, constructing or operating a light rail project.

State Rep. Justin Moed, a Democrat from Indianapolis, said “Times change. Now we’re in an environment where Indianapolis is being looked at by major companies.”

Those businesses include Amazon, which is considering Indianapolis as a home for its second headquarters. Moed said he knows public transport is high on their list.

Central Indiana has the Red Line Bus Rapid Transit in the works, but the Indy Chamber said light rail could bode well for the region’s future.

Mark Fisher with the Indianapolis Chamber of Commerce said Tuesday during testimony on the light rail transit idea, “We currently have no plans for light rail, but this is an opportunity to put more tools in the toolbox and let these decisions be made where they should be, at the local level.”

The bill passed the committee 7-2 on Tuesday.

But State Sen. Mike Delph, a Republican from Carmel, voted “no” in a committee hearing Tuesday. He said he’d rather see money go toward fixing Indy’s pothole problem.

“I think we need to focus on a laser beam on getting these potholes fixed,” Delph said. “I also think we need to have some accountability and transparency in terms of the total cost of this light rail project. I think someone knows about plans.”

Some people on the street said they like the idea of Indiana light rail transit.

Amanda Dickinson, who said she would use light rail in Indianapolis if it existed, said  “I have a friend who doesn’t drive. She has specifically told me the only reason she won’t move to Indianapolis is because we don’t have a good public transportation system.”

Another woman, Patricia Angotti, said she probably would not ride on an Indianapolis light rail system “because I wouldn’t go anywhere it goes.”

The bill returns to the full Senate, where, Moed said, he’s expecting bipartisan support. The bill passed the House 90-5 in January.