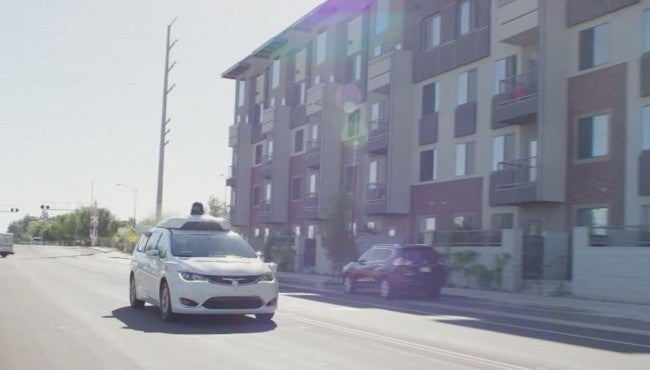 INDIANAPOLIS (WISH) — Would you ever get behind the wheel of a driverless car?

Would you let one chauffeur you around?

That might seem far-fetched, but Indiana lawmakers are paving the way for driverless vehicles at the Statehouse.

Companies already have permits to test driverless cars on public roads and highways in California. Could Indiana be next?

State Sen. Jim Merritt, an Indianapolis Republican and a member of the Legislative Transportaton Committee, said, “There are so many people who are behind the idea of autonomous vehicles that we have to create a framework in state government to allow them.”

Which is where State Rep. Ed Soliday’s driverless vehicles bill comes in. The Valparaiso Republican’s bill already passed both chambers.

Soliday said, “It encourages testing and research in Indiana on autonomous vehicles but, at the same time, assures public safety.”

The state representative claimed 75 percent of Americans say they’re afraid of driverless vehicles. Still, Soliday pointed to mobility benefits for the blind, a leg up for truckers, and possible traffic reduction. But, he said, there are no federal standards for driverless vehicles.

Soliday said, “To quote the Rand Corp. report: Today, you can run a autonomous vehicle into a brick wall, kill everyone on board and be fully compliant with every state and federal law because there is no standard and no law regarding a robot driver.”

The Indiana Department of Transportation is also watching the driverless car debate at the Statehouse. This week, INDOT announced an expansion of what they’re calling their traffic signal technologies to get ready for connected and driverless cars.

Scott Manning, an INDOT spokesperson, said “I think this is a nice compliment to the conversation that’s advancing at the Legislature.”

Mannign said INDOT will use about 20 stoplights statewide that can wirelessly share data between vehicles.

Manning said, “If we notice a lot of vehicles swerving in a given area, that would tell us that there might be an issue there with potholes. We’d be able to respond and get maintenance to those areas sooner.”

Soliday said his legislation would also require a permit from an autonomous vehicle task group that could be revoked, say, if you run 10 stoplights.

Soliday said some of the features that might be in your car now, including lane-keep assist or adaptive cruise control, are baby steps to complete autonomy.

The bill next goes to a conference committee to work out amendments from the Senate.

After the story aired Wednesday, RAND senior information scientist Nidhi Kalra reached out with this statement:

“Soliday’s statement is not an accurate quote and is a bit misleading. Our work notes that because the Federal Motor Vehicle Safety Standards (FMVSS) are designed for human-driven vehicles, they have little to say about governing autonomous vehicles (AV). As such, we note that conformance with FMVSS is no guarantee of safety when it comes to AVs and non-conformancewith FMVSS is also not a guarantee of danger, and that’s why FMVSS is not the best way of thinking about AV safety.

“Our paper is at https://www.rand.org/pubs/perspectives/PE258.html and the relevant text is:

“‘[It] is not possible to compare the vehicle components of an AV with an FMVSS-compliant vehicle, while separately comparing the control components of an AV with human drivers: The two are completely integrated. The absurdity of this approach becomes clear when considering the following hypothetical situation: An AV could be designed to (a) conform to all FMVSS and (b) drive headfirst into the nearest wall, and such a vehicle would not require any exemptions to be sold in the United States. In other words, an AV could be completely compliant and still unsafe.’

“Granted, NHTSA’s (National Highway Traffic Safety Administration’s) investigative protocols would be quickly called to the scene and the vehicle would be taken off the market.”