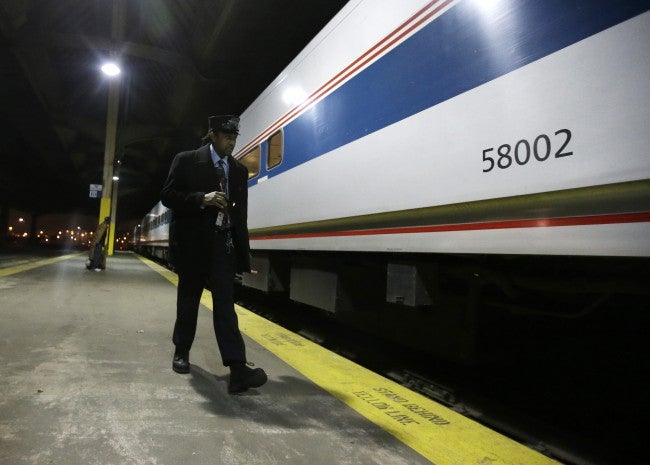 INDIANAPOLIS (AP) – The hum of incandescent lights fills downtown Indianapolis’ sleepy Amtrak waiting room when the intercom crackles on at 5:30 a.m., stirring bleary-eyed travelers with the news that they’ll soon be boarding the Hoosier State line, bound for Chicago.

But what lies ahead isn’t a swift 196-mile journey between the cities. It’s a more than five-hour trek – some two hours longer than the trip would take by car. And that journey can drag on significantly longer when bottlenecks seize up the Chicago area’s ribbons of freight rail lines.

The Hoosier State is the least-traveled of Amtrak’s routes, with just under 34,000 passengers in fiscal year 2014. It’s also the only short-haul Amtrak route still in search of a long-term funding deal after Congress shifted most of the costs of those lines to the states.

Riders who enjoy rail travel or rely on the train because they don’t drive want the line preserved. But its future depends on whether Indiana can reach a funding deal and also set into motion improvements to make the line more attractive to travelers.

A 2008 law required states to pay 85 percent of the costs of Amtrak’s 28 routes of less than 750 miles, with Amtrak covering the rest. That law, which affected 19 states, required cost-sharing agreements with Amtrak by October 2013.

That split and Amtrak’s removal of reservation-only seating opened up space on the route’s busy Harrisburg-to-Philadelphia segment, boosting overall ridership and revenue and allowing the state to offset its costs, he said.

Indiana Gov. Mike Pence has balked at using the funding methodology Congress specified. The Indiana Department of Transportation joined with seven partners, including cities served by the route, to pay Amtrak $2.7 million to keep the Hoosier State line rolling for one year.

That deal ran out in October, but the line is still running as Indiana and Amtrak officials who’ve twice extended their negotiations continue seeking a long-term funding deal. Indiana is also in talks with a private suitor, Iowa Pacific, that wants to take over the line’s operations.

Carolina, Washington, Oregon and other states use a mixture of Amtrak-owned and state-owned equipment for their short lines. And North Carolina directly manages its Carolinian and Piedmont lines with equipment the state owns but Amtrak manages.

INDOT spokesman Will Wingfield said the state hopes to reach deals with both Amtrak and a private partner that can boost the Hoosier State’s on-time service, reduce taxpayers’ costs and make the service more sustainable.

The Hoosier State line, which began service in 1980, runs four days a week between Indianapolis and Chicago, with stops in Crawfordsville, Lafayette, Rensselaer and Dyer. Its lone 6 a.m. departure time creates an unappealing, early wake-up call for the college students, families, business travelers and others who regularly use the line. And it doesn’t return to Indianapolis until about midnight.

The Hoosier State must stop near Crawfordsville so a crew member can jump off and manually throw a switch before it can continue its journey, Magliari said. And each time it leaves Chicago, the train needs clearance from dispatchers for seven different railroads.

Magliari said Amtrak is in talks with the Canadian National railroad to use its tracks throughout most of the Chicago area.

“If we can take small bites out of it – five minutes here, five minutes there – there’s ways to make this route driving time-competitive, and some of them are not million-dollar projects,” he said.

Jeris Eikenberry, a 78-year-old retiree from West Lafayette, rides the Hoosier State several times a year with his wife to visit their son and daughter in suburban Chicago. They love train travel’s relaxing qualities and their ability to move about the passenger cars.

Eikenberry said the nation needs to invest more in its passenger rail system to make it more like the efficient system linking Europe’s cities.

“We’ve done away with a system that can replace cars, and that means more traffic problems,” Eikenberry said. “There’s a point where convenience and necessity cross, and I don’t think we’re there yet.”