Indiana man, suspect in wife’s shooting in Ohio, kills self 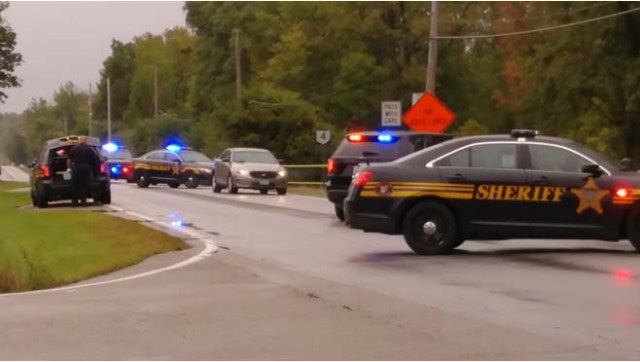 JEFFERSON TOWNSHIP, Ohio (WDTN) – An east-central Indiana man who was a suspect in Wednesday morning’s shooting in Jefferson Township has died.

The Montgomery County Sheriff’s Office said Hurley planned to shoot his wife outside a house in Jefferson Township. The shooting happened outside a house in the 5600 block of Germantown Pike near the intersection of Shank Road just before 7:30 a.m. Wednesday.

The sheriff’s office said the man hid in a shed near the house.

When his wife was dropped off at the home to pick up her car, the man came out of the shed and started shooting.

In a 911 call, a woman told dispatchers that a man from Indiana had shot a woman in front of a house. The 911 caller said the man walked around outside, reloaded his weapon and later shot himself in the head.

The 27-year-old woman was shot twice. She was taken to a local hospital, where she was listed as stable. Authorities said she was expected to recover.

After the shooting, the man tried to jump in the back of a pickup that was driving away. The driver of that truck sped off, throwing the suspect from the bed of the truck.

The owner of the house approached the suspect with a shotgun. At that point, the suspect shot himself in the head, killing himself.

Authorities say the suspect and victim were married, but currently separated. The woman was reportedly in the process of obtaining a protection order against the man. The couple was reportedly going through a divorce.

The owner of the house where the shooting happened was allowing the woman to keep her car there, according to authorities. The homeowner and the woman were not related.