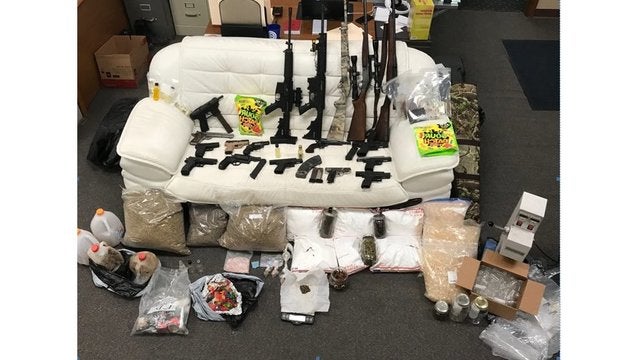 TERRE HAUTE, Ind. (WTWO) — Four people were arrested in Vigo County after a drug task force found Xanax-laced gummies, other drugs and guns inside a trailer.

The Vigo County Drug Task Force (VCDTF) has been involved in an investigation concerning the distribution of controlled substances in the Terre Haute and Vigo County areas.

According to authorities, the investigation began when a Vigo County School District had at least one student overdose on candies that had been laced with Xanax, a schedule 4 controlled substance.

Wednesday night, the VCDTF obtained a search warrant for a residence on the north end of Vigo County after identifying it as a source location for several controlled substances consistent with what the overdosed students had ingested.

During the investigation, detectives learned that the suspects had numerous firearms and several dogs inside the trailer, and the assistance of the Terre Haute Police Department’s Special Response Team was requested to secure the location.

The occupants of the residence had attempted to destroy evidence of a hallucinogenic drug by pouring the liquids contained in two one-gallon containers into the toilet.

Indiana State Police Clandestine Lab Team arrived at the address to collect samples of the remaining liquids and make the location safe.

The following subjects were charged with the following crimes and transported to the Vigo County Jail.