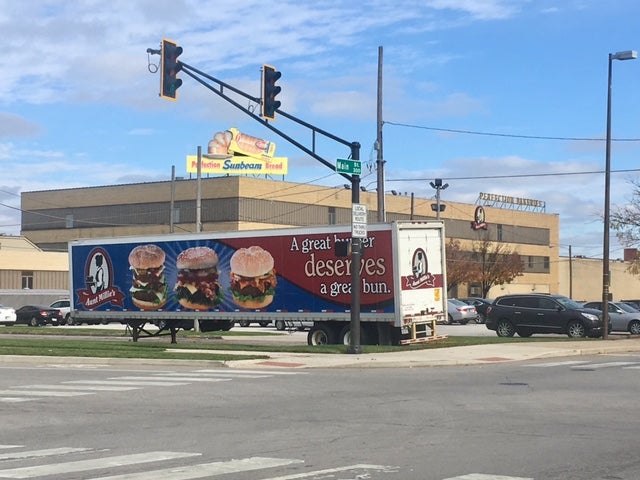 Aunt Millie’s said it will close its Pearl Street bakery in downtown Fort Wayne in phases beginning this month, with all operations stopped by April. About 91 bakery employees will be affected, the company said.

Aunt Millie’s, which operates six other bakeries in Indiana, Michigan and Ohio, will remain headquartered in Fort Wayne, with about 120 administrative employees expected to remain. It’s not clear if that operation will continue at the expansive Pearl Street plant.

Company leaders told employees about the closing on Monday. The company will work with the bakery union to offer transitional assistance to those affected, Aunt Millie’s said in a news release.

The business is running seven bakeries throughout the Midwest but say they only have the capacity to run six. After two of their their key grocery customers went bankrupt this year, they couldn’t handle the blow to their revenue stream.

“Due to the current business environment and after undertaking a capacity and logistical analysis, we determined we need to close our Fort Wayne bakery,” said Popp. “This is a critical step in reducing excess capacity and costs, to allow ourselves to maintain our leadership position in the baking industry. We reached this extremely difficult but necessary decision after thoroughly exploring other options.”

The Fort Wayne bakery produces both Aunt Millie’s and Sunbeam products, beneath the iconic Sunbeam circulating bread slices sign. Aunt Millie’s said both breads will be baked at the company’s other bakeries.

“Our customers will still be able to find their favorite bread at grocery stores throughout the Midwest,” said Jay Miller, Aunt Millie’s CFO.

Chris Popp is executive vice president of manufacturing and great grandson of the company’s founder. He said the news to the bakery workers wasn’t easy to break.

“Growing up in a family business, you know the people,” he explained. “You get to know their family. So anytime you have to make a decision that impacts them it’s even more difficult.”

He’s also aware of how people will miss the sweet smell of bread the factory casts into the community.

“That is disappointing because that’s something people always comment on,” he said. “When you work here, you get used to it. You don’t notice it, but for so many folks downtown it’s something that they look forward to and at some point will be missed.”

Aunt Millie’s has been family-owned since 1901. It employs about 1,600 people companywide.