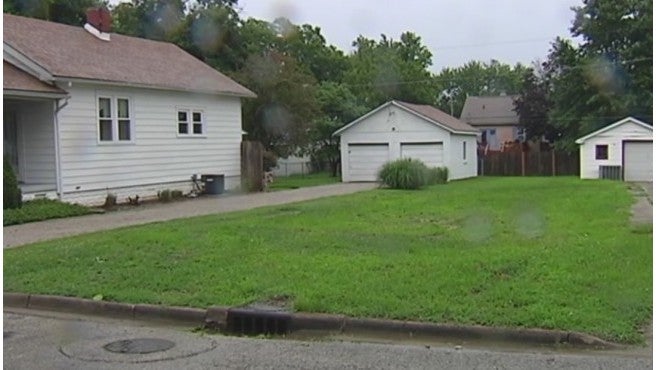 All that’s there is an empty lot, and complete silence, one year after complete chaos.

“It was like a bomb went off. Big old fireball, about the size of a hot-air balloon went up in the air. It was Huge,” Tim Kelley said.

Kelley lives across the street from the house that exploded on June 27, 2017. Others described the scene as well.

“It blew the roof up, blew the walls out, and then everything comes down around on top of it,” said Ron Campbell, Evansville Fire Department operations chief. “I mean, we had parts of the building that were across the street and several hundred feet away.”

The explosion rocked the entire neighborhood. Kelley could feel it at his front door.

“There was fire, I could feel it through the door. As soon as I opened the door, I could feel the fire through there,” he said. “I called 911 as soon as it blew up. I just told them a house exploded across the street.”

Emergency responders had their work cut out for them navigating the massive flames.

“You don’t know if you’re going to have a secondary explosion, just several things you have to consider,” Campbell said. “The immediate mindset is the victims, making sure to get the victims out.”

There were five people inside. Three made it out, but Sharon Mand and Kathleen Woolems died of smoke inhalation.

A year later, people are still asking why it happened.

“The cause of the explosion is obviously a gas leak. Now, it’s undetermined, because we never could really pin down exactly the cause of that leak,” Campbell said.

They also don’t know what ignited the leak.

“The evidence is there. We have to disturb it. We have to move it because we’re searching for people. So, at the end of the day, I mean, just all the conditions mad it very, very difficult to make a final determination. So, am I happy with it? No, but there was nothing we could do about it,” said Battalion Chief Charles Hertzberger.

What they could do was extinguish the flames. But the fire can still be felt on Hercules Avenue long after it was put out.

“Well I don’t think anybody will forget it, but it was kind of sad, really,” Kelley said.