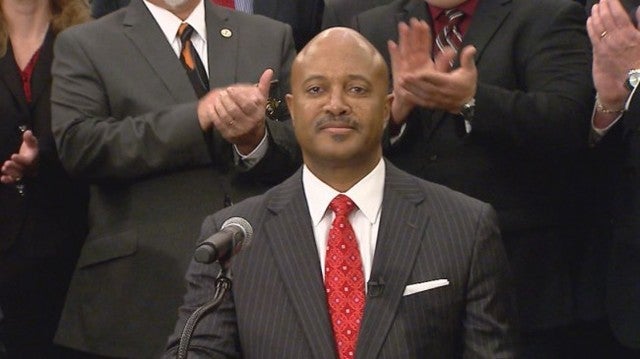 Holcomb called the findings of the legislative report alleging inappropriate touching by Hill “disturbing” and said he supported an investigation by the Indiana Office of Inspector General.

House Speaker Brian Bosma, a Republican from Indianapolis, and Senate President Pro Tem David Long, a Republican from Fort Wayne, released a joint statement on Thursday night asking Hill to apologize publicly and resign. In that statement, they said that Curtis Hill “is not our employee; if he was, he would already have been fired.”

Four women had the courage to step forward to report sexual harassment by the Indiana Attorney General. The findings of the recent legislative report are disturbing and, at a minimum, show a violation of the state’s zero tolerance sexual harassment policy. I concur with Sen. Long and Speaker Bosma that Attorney General Hill should resign, and I support a thorough investigation by the state’s Inspector General.

We believe that the women who came forward with accounts of inappropriate behavior by Attorney General Curtis Hill in the early hours of March 15, 2018, are telling the truth regardless of the Attorney General’s denial of these allegations. We do not believe that Curtis Hill, as chief law enforcement officer of the State of Indiana, can continue to perform his duties, nor should he, and we call for his immediate resignation. We have further requested that the Indiana Inspector General thoroughly investigate these allegations. Sexual harassment is unacceptable at any time, in any place. It makes no difference that these incidents did not occur in a workplace environment. Curtis Hill is not our employee; if he was, he would already have been fired. Because we cannot terminate his employment, we ask instead for him to own up to his actions, apologize publicly to the victims, and tender his resignation immediately.

It had been my hope that the Attorney General could realize on his own that his salacious behavior has no place in our state government, then do us all a favor and quit.

Now that his governor and his party leadership in the Indiana General Assembly have weighed in, let me make it unanimous: Mr. Attorney General, it is time for you to go.

Let us praise those brave women who came forth and spoke of this vile conduct against them. They are the ones to admire for their courage.

I had already been in discussions with our state Inspector General about the need to investigate this matter. I am glad that others have asked for the investigation as well. As it proceeds, let us make sure we support and protect the victims.

It’s in the hands of our Attorney General to live up to his charge as our state’s chief law enforcement officer and do what’s right. Quit.

Indiana has no tolerance for harassment of any kind. I appreciate tonight’s statements from our Governor, Lt. Governor and legislative leadership.

Indiana deserves a safe work environment, which extends beyond the workplace. I am disappointed that I must make such a call, but Attorney General Hill should resign. Our state leaders are held to a higher standard and must behave in such a manner.

My first and foremost concern has been for the women who are the victims of this outrageous conduct. I had hoped that Attorney General Hill would have used the holiday as an opportunity to take a second look at his situation and do the right thing. That has not occurred. It’s time for Attorney General Hill to resign immediately.

News 8 reached out to the Office of Inspector General; a spokesperson declined to comment on Thursday night.

News 8 reached out to the Attorney General but did not hear back on Thursday night.