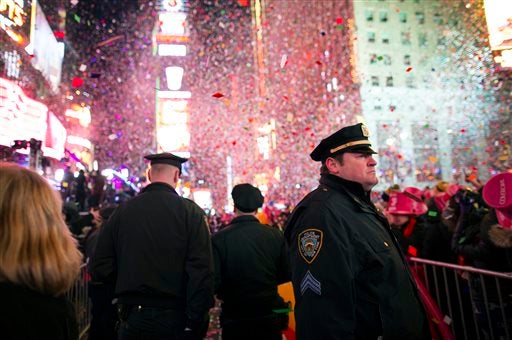 Before President Barack Obama left for his Hawaii vacation he asked his top security officials for a briefing on security threats facing the nation over the year-end holidays.

Among the threats he was told of was one originating overseas warning of possible attacks in three major U.S. cities, New York, Los Angeles and Washington, between the Christmas and New Year holidays, according to senior U.S. officials briefed on the matter.

The threat was uncorroborated and was based on a single source.

But in the wake of attacks in Paris, San Bernardino and elsewhere, the FBI is boosting the number of agents and staff in some of its 24-hour command centers around the country, including New York, Washington and Los Angeles. New York City says it will have 6,000 police near Times Square, the biggest such deployment ever. The threat doesn’t mention any specific locations in the three cities. Officials say their areas of concern always focus on so-called soft targets, including large gatherings and mass transit.

In Los Angeles the top concern is the Rose Bowl parade and football game, a major draw on television and for residents and tourists in the region.

“Though we know of no intelligence that is both specific and credible at this time of a plot by terrorist organizations to attack the homeland, the reality is terrorist-inspired individuals have conducted, or attempted to conduct, attacks in the United States this year,” a December 16 Department of Homeland Security bulletin says.

The threat involving the three U.S. cities is among many that officials are tracking. Federal and local officials say they have to treat even uncorroborated threats seriously. Another earlier single-sourced threat in December didn’t materialize. But what authorities worry more about are possible plots that they don’t know of.

U.S. officials repeatedly said there were no known credible terror threats in recent months, including in the days before a husband and wife carried out a well-planned shooting attack on an office gathering in San Bernardino, California.

One senior U.S. official says the security concerns around the New Year rival those around the July 4 holiday, a period during which the FBI said it thwarted plots and made more than two dozen arrests, some on non-terrorism charges simply to get suspected jihadist sympathizers off the street.

The U.S. isn’t alone in heightened security concerns. In recent days, authorities in Belgium and Turkey have said they foiled possible plots on New Year’s celebrations.

And it comes at the end a year of with an unprecedented number of terror-related prosecutions and investigations in the U.S.

Senior U.S. officials say the number of probes reflects the way ISIS has innovated terrorist threats. Instead of vetting recruits and carefully planning major attacks as al Qaeda and other groups have done, ISIS uses a diffuse-propaganda strategy to encourage its recruits to be self-starters.

Despite those concerns, Comey and other senior U.S. officials are wary of causing panic.

One senior counterterrorism official noted that the number of Americans killed by terrorists in the past year is fewer than 20.

“That’s a bad weekend in Chicago,” the official said, adding. “Let us worry about the terrorists; Americans should go do their celebrations. They should be vigilant, but they shouldn’t let these threats keep them from leaving home and living their lives.”

by: Annessa Chumbley / 14 mins ago