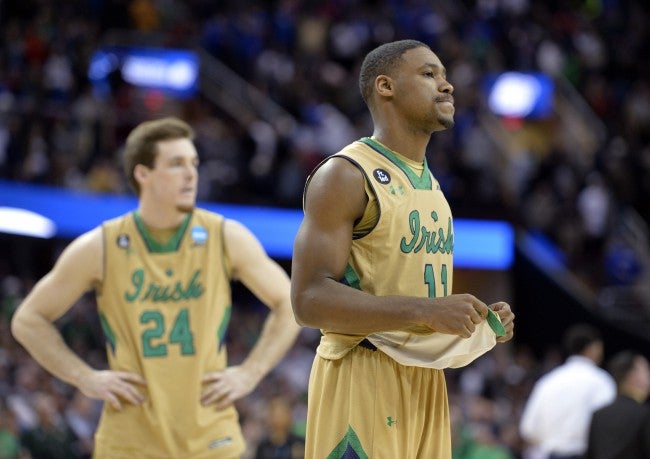 The Fighting Irish came tantalizing close, though, leading No. 1 Kentucky through much of the second half before falling 68-66 late Saturday night.

“It’s tough. Just to be so close to making history, from doing something so special and just like that it’s over,” said guard Jerian Grant, who missed a rushed 3-pointer from the corner at the buzzer.

Despite the heartbreaking loss, the season will go down as one of the best in Notre Dame history. The Fighting Irish came up a victory short of making it to the Final Four for just the second time in school history.

The Irish (32-6), picked in the preseason to finish seventh in the Atlantic Coast Conference, bounced back from a 15-17 record to win 17 more games than last season, the best turnaround in school history, They won a conference title for the first time in school history. The Irish fell a win shy of the school record for victories set 106 years ago, became the first Notre Dame squad in 26 years not to lose consecutive games and advanced to the Elite Eight for the first time since 1979.

“It was a special season. A real special group of guys. We won a lot of big games,” guard Steve Vasturia said.

Notre Dame has been known more in basketball for great moments than great seasons. There was Austin Carr scoring 46 points to lead the Irish to an 89-82 victory in 1971 over top-ranked UCLA, which went on to win its fifth straight NCAA title. In 1977 the Irish beat top-ranked San Francisco to end a 29-game winning streak. The greatest moment was in 1974 when the second-ranked Irish finished with a 12-0 run to upset No. 1 UCLA and end the Bruins’ 88-game winning streak.

But this year’s team had more than a moment. The Irish beat North Carolina and Duke twice each, and also beat Michigan State, Butler and Wichita State. They won six conference road games for the first time in school history. They rallied from 18 points down at North Carolina State to beat the Wolfpack in overtime and used a 26-3 run to beat UNC in the ACC championship game.

This season also ended criticism that coach Mike Brey’s teams couldn’t win in the postseason. The Irish had lost in the opening NCAA Tournament game four times and three times in the second game and had advanced to the regional semifinal just once before this season.

The team will be most remembered for how Connaughton and Grant helped build a special chemistry after a divisive season in 2013-14 following Grant’s suspension for a semester for what he called an academic mistake.

“Those two guys are big-time winners, and man, have they left a mark for the young guys in our program,” Brey said.

The Irish lose Connaughton and Grant, but junior Zach Auguste and sophomores Demetrius Jackson and Vasturia return, as do forwards V.J. Beachem and Bonzie Colson. Next year’s team will have a hard time matching this season, but Brey is optimistic.

“You’ve got a nice nucleus of guys that were a big part of a heck of a year, so I really hope that’s something for us to build on,” he said. “I’m excited about moving forward with that group.”