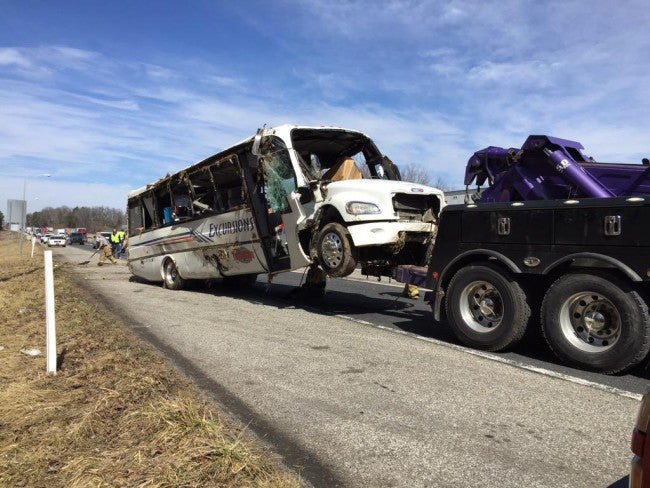 HENRYVILLE, Ind. (WISH) – The bus company involved in Thursday’s rollover crash along I-65 in Southern Indiana was also involved in a fatal crash in Northwest Indiana in late 2013, records obtained by I-Team 8 show.

Excursions Inc., which operates 55 passenger motor coach buses under the name Excursion Trailways, is based in Fort Wayne and also has offices in Ottawa, Ohio. The company employs 39 drivers between the two states, according to federal records.

Thursday’s accident, about 20 miles north of Louisville left 19 people hurt, including 16 members of the Indiana Tech bowling team and several coaching staff members. The bus crashed while heading from the school’s Fort Wayne campus to a competition in Smyrna, Tennessee.

FMCSA records also show Excursions was involved in a fatal crash along I-80 in Lake County, near Hammond, in October 2013.

According to police reports obtained by I-Team 8, the accident occurred on a rainy Saturday night as the bus was traveling from suburban Chicago back to Fort Wayne. Multiple media reports at the time of the crash show the bus was operating as a charter, carrying members of the University of Saint Francis Fort Wayne football team home from a game.

Police reports show a 1996 Toyota Tercel driven by Shawna Popenhagen, 21 of Hammond was east bound next to the Excursions bus when it lost control and veered in front of the bus. Popenhagen told investigators that her boyfriend Joshua Walberg, 21 of Hammond grabbed the steering wheel of the car while the two were arguing, causing her to lose control.

The bus driver, William Johnson, 64, of Upland, “attempted to move over to the left, but was unable to avoid the vehicle,” the police report states.

Walberg was not wearing a seat belt at the time, police said. He was pronounced dead at the scene.

No one on the bus was hurt in the accident.

Excursions was established in 2000 in Fort Wayne, and has grown rapidly since. Last year, its fleet logged more than 687,000 miles, federal records show.

Reports also show the company purchased Ottawa, Ohio based Executive Coach in October 2007, expanding its fleet. Prior to the purchase, Executive Coach was involved in a separate fatal crash earlier that year on I-75 in Atlanta, Georgia. In that March 2007 crash, a bus carrying 33 baseball players and coaches from Bluffton University failed to make a turn on an exit ramp and vaulted over a concrete bridge railing, killing five people on board.

Several lawsuits were filed in relation to that crash, but Excursions was not involved, according to reports.

An employee who answered the phone at the company’s Fort Wayne office Thursday declined to answer specific questions about the company’s safety record or about Thursday’s crash, but issued the following short statement:“We are fully cooperating with the investigation. We are not in a position to respond to questions at this time, but we will respond to inquiries as answers become available.”