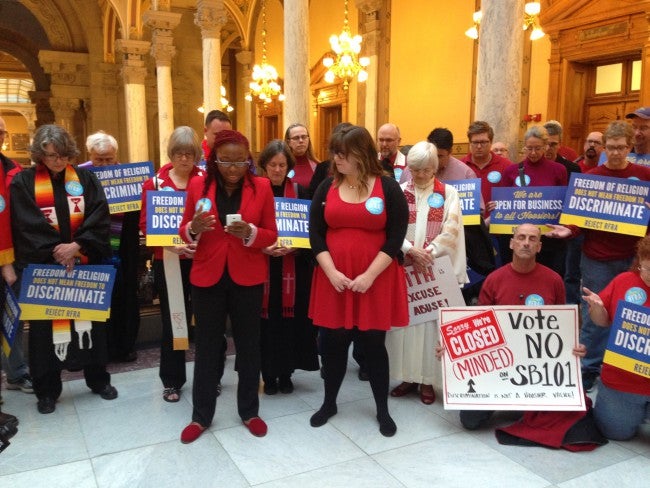 Opponents call it a license to discriminate.

It’s the followup to last year’s battle over gay marriage with slightly smaller crowds and a little less national interest.

There is still plenty of emotion on both sides.

On one side: conservatives and religious leaders looking to send a message.

On the other side: many of the same people who fought to legalize gay marriage, including Amy Sandler who took part in the state’s first gay marriage, authorized because her late partner, Nikki Quasny was dying of cancer.

The bill that has prompted some business owners to post anti-discrimination messages is also opposed by Eskenazi Health.

“Our patients might believe that they could be denied care because of a staff member’s religious belief about them or their families,” said hospital spokeswoman Jessica Barth.

But supporters of the bill filled the hallway outside the chamber and one of them, a pro-life activist, said it would protect a caterer who might be asked to supply food for a pro-choice reception.

“For a pro-life business owner in the state of Indiana to do a catering business specifically for the purpose of raising funds to advance the killing of unborn children would be a direct violation of that business owner’s faith,” said Mike Fichter of Indiana Right to Life.

“This bill sends a message to those within the government that, when in doubt, err on the side of religion.” said Mike Breen of the Thomas More Society.

And that argument won. The committee approved the bill 9-to-4 on a party line vote with Republicans voting for it.

It now goes to the full House.