Silver Alert for missing Jefferson County toddler has been canceled 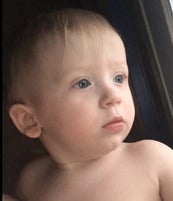 UPDATE: The Silver Alert has been canceled after Kayden was located. Original story follows below.

Police tell us that Kayden is believed to be in extreme danger and may need medical assistance.

Kayden is described by police as a white male, 2 feet 8 inches tall and weighing 29 pounds. Kayden has blond hair and blue eyes and last seen wearing a blue, yellow, and white Paw Patrol t-shirt and blue and grey shorts.

Kayden is believed to be in the company of Jaxx Damian Falconberry, a white male described as 5 feet 7 inches tall and weighing 185 pounds. He has brown hair with hazel eyes, and police believe he is driving a black 2004 Chevy Impala 4 door with Indiana plate ALV239.

If you have any information on Kayden Matthew Fresh, contact the Jefferson County Sheriff’s Office at 812-265-2648 or 911.