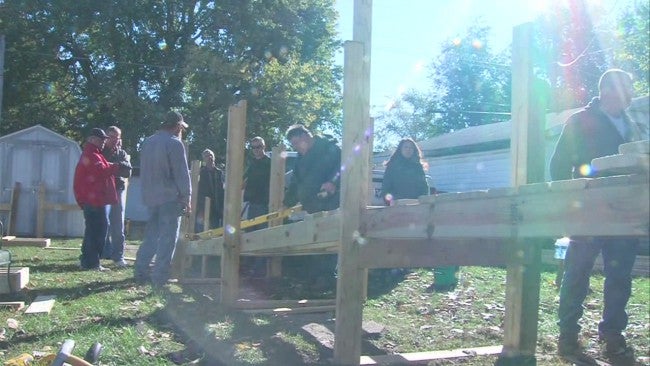 However, her active lifestyle was put on pause after an accident at her grandson’s apartment.

“I had to go in on a walker and all that kind of stuff,” said Reeves, “It was terrible.”

Over the weekend, Reeves received quite a few sets of helping hands. Among them was Chip Miller and his team from Newlin-Miller Realtors.

“Living in your home, it’s your right, it’s your goal,” said Miller, vice-president of Berkshire Hathaway HomeServices/Newlin-Miller Realtors, “It’s something we should be doing, to help people be able to stay in their homes and be able to act independently in their home.”

Miller and his team were just a few of the volunteers on hand to help build Reeves a wheelchair ramp. It’s part of the Ramps For Freedom Program through The Will Center.

“I think that it’s wonderful and they did a marvelous job,” said Reeves, “They worked like beavers!”

Using tools from their maintenance department, Miller and about 15 – 18 volunteers were hard at work, drilling, digging and sawing. They were able to complete the ramp in about five or six hours.

“It’s a very good feeling to have such great teamwork,” said Miller.

If you are interested in learning more about the Ramps For Freedom Program, you can visit The Will Center website or call (812) 298-9455.