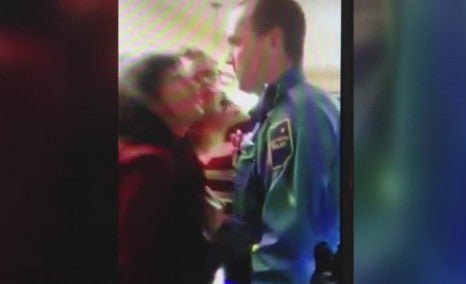 FORT WAYNE, Ind. (WANE) – The cell phone video of a woman verbally attacking a Fort Wayne police officer has gone viral and now has about 300,000 hits in less than a week.

Ealing said although incidents like this one are part of the job, he feared for his safety.

“If you were there and you felt the tension in the air, I go ‘it was waiting for that one spark to explode’ and I’m like ‘I can’t give them that,’” said Ealing, “I’m by myself and this is going to end poorly and we’re out in the parking lot and who knows what’s in people’s cars.”

After some arguing, the group eventually made it outside where Ealing tried to arrest her. About 50 people were in the parking lot that he referred to as a mob.

You can hear the man who was recording yelling comments like, “you’re doing this to another American” and telling the crowd, “Are you guys going to film or are you going to get over here and do something?”

“I didn’t know that this guy kept saying silly things like ‘this is an American’ and ‘this is America.’ I go ‘OK.’ Well, I just heard a bunch of shouting and angry people,” he said.

Ealing said the manager of IHOP was holding the door open to separate him and Hancock from the rest of the crowd.

“I was trying to control her and stay cognizant of the fact that there’s all these people in play as well,” he added.

“Thank you, because without him filming me, then it would just be my side of the story versus everyone else’s side of the story,” said Ealing, “They weren’t doing anything to help the situation so I thank him for video taping that for me. It saves me a lot of work.”

Ealing said after leaving the scene Sunday, he knew that it was going to be posted online but he never would have expected this kind of attention.

“It really surprised me that all this is for me arresting somebody and I didn’t really do anything. I’m like there was angry people. We deal with that all day long.”

Ealing said he knows officers are under a microscope given national news, however, it’s important not to jump to conclusions.

“99 percent of police officers in America would have done exactly what I did. That’s how we’re trained. That’s how the academy trains us, that’s what we’re supposed to do. But there’s the one percent in any job that they probably don’t belong there. There’s one percent of teachers that don’t act appropriately. There’s one percent of fast food workers that can’t get the order right. There’s no silver bullet that’s going to fix all that,” said Ealing, “We’re not anything to be afraid of. We’re not anything to not be trusted. We’re here to serve you and protect you and we’re willing to do that all day, every day.”

In addition to arresting Hancock, the President of the Patrolmen’s Benevolent Association said he is hoping that the other two involved in the video will be charged.