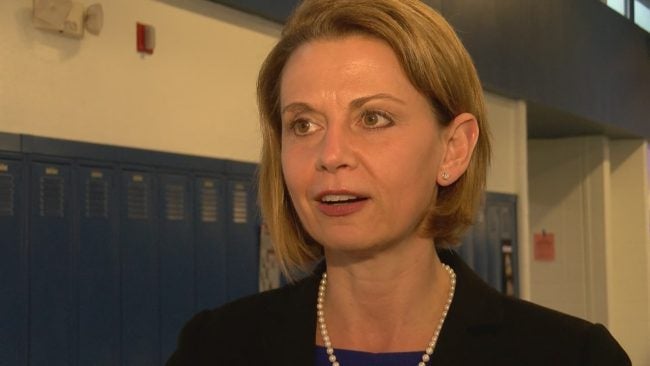 The money will be specifically be spent on four upgrades. Each school will either get an upgraded or new entrance. Glass sheeting will go over windows and doors making them bullet resistant. Technology upgrades will lock down the school quicker in the event of an emergency. And bollards, or metal posts, will go around the schools. Bollards, for example, can prevent cars from driving into buildings.

The district has been planning on making the upgrades for some time, however, with the most recent mass school shooting, some say, it can’t come soon enough.

The bell rings. It’s lunch time at Brown County High School. In one classroom, the chairs are empty, except one. Lucas Willliams is a junior. He didn’t break for lunch because he’s working on an important assignment.

“We’re mostly working on yearbook pages because we have a big deadline on Monday,” Williams said.

Williams is the Editor in Chief of the Talon; the student newspaper. He’s also in charge of the school’s yearbook. But it’s not his deadline that’s weighing heavily on his mind.

“I saw an individual in the hallway, and Mosley often says, if I see somebody I don’t know, they don’t have a visitors pass, definitely report that. Or, I’ll go tell somebody,” said Williams.

That’s exactly what Williams did. He told school officials.

“That student reported that information and we thought that was just a huge win,” said Dr. Laura Hammack the district’s superintendent.

A lesson in security and safety is not one that Dr. Hammack takes lightly, especially after the most recent school shooting in Parkland, Florida that left 17 people dead.

“We’re really looking at every single entry and trying to toughen up those lines of entry as much as we possibly can,” said Dr. Hammack.

The district’s intermediate school already has bollards. Four of the schools have “buzz-in” entry systems and they’re regularly educating students on suspicious behavior. The $3 million will go toward improving all of the district’s six schools.

So, as school officials focus on safety, Williams can get back to focusing on meeting his deadline.

“I’m hoping I can get into politics; be a political journalist,” he said.

The upgrades will be paid for with bonds. The district currently has a $4 million bond that will be paid off before spending more money, so homeowners will not see an increase in their property taxes. The project is expected to be completed by the start of next school year.