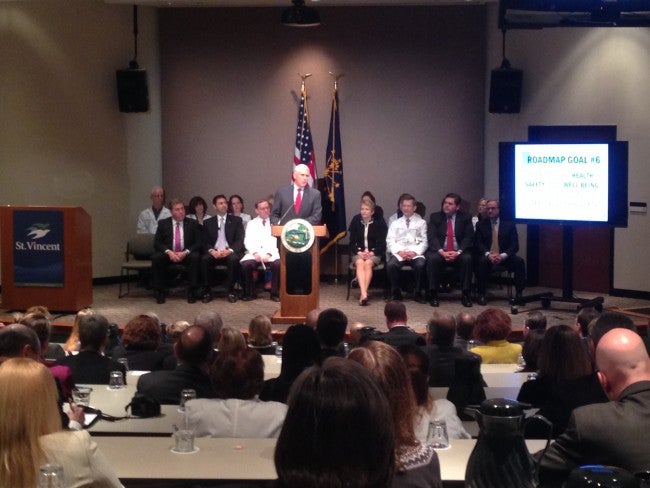 INDIANAPOLIS (WISH) – Gov. Mike Pence got his way. The Obama Adminstration has agreed to expand the Healthy Indiana Plan.

It means health insurance for as many as 350,000 Hoosiers who don’t have it now.

It’s up and running already. If you qualify for HIP 2.0 you can already sign up at HIP.IN.gov. If you sign up, coverage can begin as soon as soon as Sunday.

The governor gave a formal speech at St. Vincent Hospital to celebrate both a political and a policy victory for him.

HIP 2.0 is a reality following seven months of negotiations with the Obama Administration, highlighted by a face-to-face meeting with the President in Evansville in October.

But Mike Pence sought to focus attention on those who will benefit from this expansion of Medicaid by another name.

“This is not about policies and programs and dollars and cents,” he said. “It’s about people. It’s about members of our family. It’s about co-workers, neighbors, friends.”

He’s talking about people like Shirley Hale, who has no health insurance and came to listen. When asked what health insurance means to her, she said, “Everything, because I’m 57 years old and I could need help.”

A new assessment fee paid by the state’s hospitals makes the expansion possible.

The expansion is a part of Obamacare but the governor wants everyone to know he’s still an opponent.

“You’ll never convince me that ordering every American to buy health insurance is the right solution to our health care challenges,” he said following the speech. “That’s why I believe Obamacare should be repealed but Medicaid should be reformed.”

HIP 2.0 was approved, in part, because it had bi-partisan support in the Statehouse. Both Republicans and Democrats hailed the news.

But on a day when there was very little criticism Mike Pence got some from a right-wing group that usually supports him, the Americans for Prosperity.

They say the expansion is too expensive.