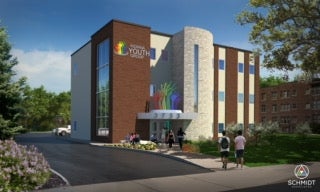 Indiana Youth Group has found a new home downtown located near 38th and Meridian Streets. It is 15,000 square feet. It also has plenty of parking and access to public transportation.

Compare that to the building Indiana Youth Group has been in since the early 90s, which is just 2,500 square feet near 46th Street and Binford Avenue. The organization is really busting at the seams. Just last year, nearly 800 youth filtered through there, totaling about 6,000 visits.

Chris Paulsen is the honorary co-chair of this new capital campaign and said while all of the 30 programs offered are helpful, it’s the suicide prevention program that’s really making a difference.

She said Hoosiers need to remember that Indiana ranks number one for teens considering suicide.

“And LGBT youth are eight times more likely to consider suicide than their peers, so Indiana Youth Group has written the first suicide prevention for LGBT youth in the nation, it’s a groundbreaking program, so we’re excited that we’ll be able to offer that to more youth and save more lives,” Paulsen said.

Indiana Youth Group has already raised $1.75 million over the last six months during the silent phase of this fundraising effort. Now they’re hoping to raise another 800,000 by April.

If they can reach that goal, they will get into this building in May to start renovations and have the entire organization moved in by the end of the year.

Naming rights for the building are still available, but the organization is accepting donations of any size.

“Indiana Youth Group is celebrating it’s 30th year next year, so it’s an organization that’s been around a long time, and I think it will continue to need to provide services for youth in the foreseeable future,” Paulsen said.