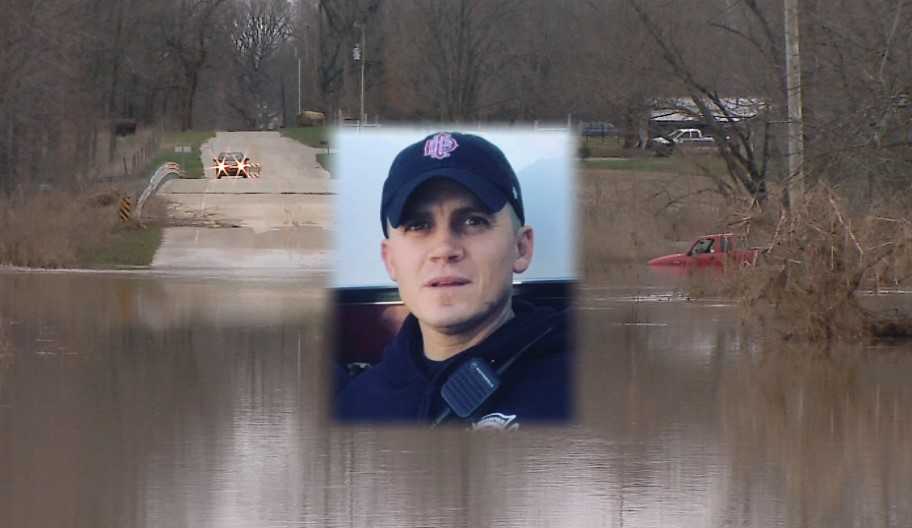 An Indianapolis firefighter was pulled from freezing floodwaters Thursday morning near the Owen-Putnam County line after a near-death ordeal on his way to work, officials said.

Damon Fine, 37, was released from the hospital the same day and felt “blessed to be alive,” according to colleagues.

The four-year Indianapolis Fire Department (IFD) veteran chose an unfamiliar path to his fire station Thursday morning because his usual route was flooded. Fine was driving westbound on County Road 1300 South, near Mill Creek, when he reached a bridge that appeared to be flat in the dark.

He was unaware of the downward slope, fire officials said, and didn’t see the rushing water several feet ahead until it was too late.

“In the blink of an eye, he was in deep water,” said Rita Reith, a spokesperson for IFD. “Damon [Fine] threw his car into reverse, to no avail. The front of the car immediately began to dip forward, with water rushing over the hood and hitting the windshield.”

Overflow from the creek had created several hundred yards of lake effect across a cornfield. Within seconds of sliding off the bridge, the vehicle was window-deep in water and the engine sputtered out.

Fine grabbed his phone, climbed out through the sunroof and managed to stay on the line with 911 dispatch as powerful currents swept him more than 200 yards away from the road. Freezing, exhausted and barely able to move, he was determined not to panic. He eventually grabbed a tree branch and clung on, still on the phone with the Owen County dispatcher.

“You know what’s insulting about this… and a little bit embarrassing?” Fine said during the call. “I’m a firefighter.”

Even professionals are not safe from high water, cautioned Reith.

“If it can happen to us, it can happen to you,” she explained. “[Fine] says his firefighter training and reminder to himself to ‘stop and breathe’ is what saved his life. Although exhaustion tried to overtake him, he didn’t give up and he didn’t panic.”

Owen County Sheriff’s deputies and officers from the Indiana Department of Natural Resources (DNR) arrived with a Jon boat, and were able to locate Fine within minutes because he was using the flashlight on his phone to signal his location.

A barricade with a “high water” warning was later installed in front of the bridge on County Road 1300 South and remained in place Friday morning.

“Damon Fine is a well-trained firefighter and understands the tremendous difficulty of staying calm when faced with an unexpected life threatening situation,” said Reith. “He is very grateful for the Owen County dispatcher and the officers who rescued him and, when he is able, would like to reconnect with them.”