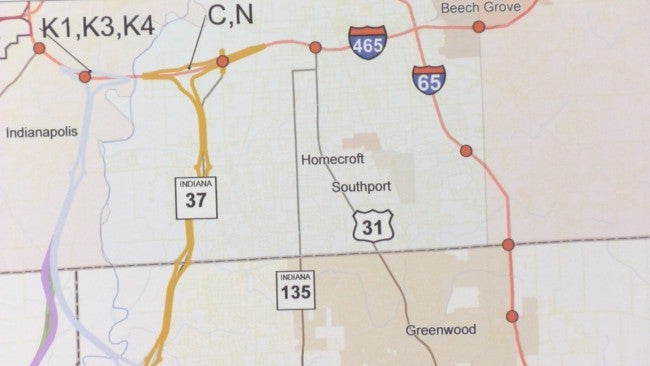 INDIANAPOLIS (WISH) — The public had another chance on Monday night to voice opinions on the Interstate 69 expansion that will connect Indianapolis to Martinsville.

Right now people have a chance to influence what route the I-69 expansion takes.

Clyde Clemmons has lived along State Road 37 for more than 30 years and has seen many changes.

“When I moved there, Highway 37 was only a two-lane highway,” he said, “Then when they put the four lanes in, they took about 35 feet of my yard.”

Since those expansions have already been made, he thinks that INDOT should use State Road 37 as a foundation for the new I-69 link north to Indianapolis.

That’s one of the 14 different routes INDOT reports it is considering.

“They’re going to put it in regardless of what I think, but it’d be cheaper if they came up 37,” Clemmons said.

He’s worried traffic could get much worse if State Road 37 becomes I-69.

“It’d be similar to I-69 up north and that’s the trouble up there. If you have one little accident on it, it doesn’t function,” Peters said.

Also, he shares the concerns of many area residents about the effect expanding State Road 37 would have on the local environment.

“They said they’ll have to have a new fire station, schools, and stuff,” he said, “Plus there’s a ton of houses this side of the river, so we got wells and sewage and all that stuff in there.”

He would like to see I-69 built west of the river.

The department will use public opinion to keep narrowing down the field of possibilities until one remains.

That decision is expected in 2017.

INDOT will hold another public meeting Tuesday at Martinsville High School at 5:30 p.m.

There is also a website for this project where you can submit opinions.