INDOT to add stoplight along I-65 detour in Boone Co. 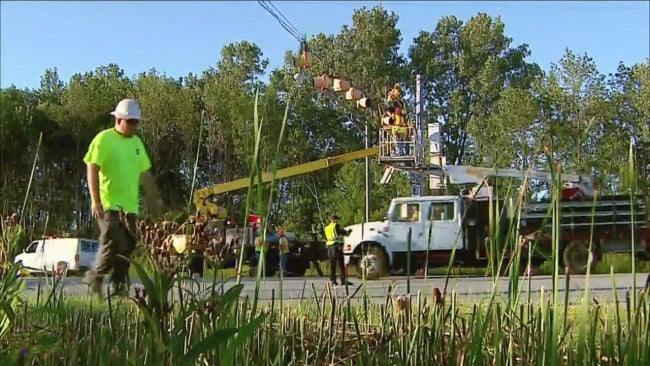 BOONE COUNTY, Ind. (WISH) – Two days after the Boone County sheriff made an emotional plea on Facebook for a stoplight on U.S. 52, Indiana Department of Transportation officials have announced they will do just that.

INDOT announced Thursday afternoon plans to add a temporary signal at the intersection of U.S. 52 and State Road 47. The signal will be installed Thursday “as part of a larger effort to ensure the safe and orderly flow of traffic,” INDOT officials said. Warnings signs, extra police and rumble strips will also be installed.

Officials warn that drivers Thursday evening could see delays and partial closures as they finish installation of a new cable to hold up the light. Everything should be back to normal by midnight.

“INDOT is committed to bringing every available resource to bear with regard to this situation, and in an effort to ensure safety, we’ll continue to coordinate with local officials, law enforcement and our field experts to monitor the detour and make sure it is as safe as possible for Hoosier motorists,” said INDOT Commissioner Brandye Hendrickson.

The traffic at the intersection of US 52 and State road 47 is loud, but the concerns we’ve been hearing for the past week were even louder.

Workers at the neighboring Dairy Queen talked about the danger they’ve witnessed. “One pulled out, didn’t see the other and smacked right into them,” said general manager Laura Redman.

Crashes and close calls were becoming the norm, forcing the Western Boone School Corporation to take matters into their own hands. It requested to have police escorts guide school buses across the intersection to keep students safe.

“Every morning you know the radio was going to go off, something’s going to happen,” said Cecil Gosser, the transportation director for the school corporation. “You’re just waiting to see and hope the buses are past and it doesn’t include one of ours.”

A nearby wreck that killed a driver this week left the Boone County Sheriff making an emotional plea for change. Thursday that happened when INDOT got the green light to put in a stop light.

Holly Albertson’s son rides the bus that crosses the intersection and was skeptical a signal would get installed. “I was happily surprised to see that they’re out there right now putting in a light and working on it. It’s exciting,” she said.

“I did not think it would happen,” added Gosser. “I figured the state would drag their feet until they opened up the bridge and say ‘there you are, we’re good to go.'”

But now they really are good to go and soon, stop when the light turns red. “The crossing here is a much better feeling tonight,” said Gosser.

“It makes me feel a little safer when my kids are going to school,” said Albertson. “I have an older one that drives to Indianapolis and she has to get out on that intersection and it makes me nervous every morning. Rush hour traffic is not a good thing.”

Indiana State Police were at the intersection while IINDOT workers installed the stoplight, helping to direct traffic. “We have to take those people’s concerns into mind,” said Sgt. Jason Miller. “INDOT wants that, state police wants that, Boone County wants that, the Governor’s office certainly wants that.”

We reached out to INDOT to see if the stoplight could become a permanent fixture at the intersection. A representative told us the traffic data will be analyzed once the detour wraps up and a decision will be made then.SHERIFF VOICES OPINION

The Boone County sheriff posted on Facebook following a deadly crash on U.S. 52, asking for a stoplight in the area. U.S. 52 in Boone County is currently being used as a detour for northbound I-65, which is shut down because of a bridge problem. INDOT officials said Wednesday the fatal crash wouldn’t have been prevented by a stoplight.

Sheriff Nielsen responded to INDOT’s decision to install a temporary light at US 52 and SR 47.

Here is his statement:

I am pleased with the decision from INDOT officials to install a light at the intersection. Our goal has always been protecting our school children, the citizens, and the motorists, traveling through Boone County. In addition to the light installation, INDOT will be installing warning signs and rumble strips to prepare motorists of the upcoming traffic light. The decision made today was the right decision and will undoubtedly help to ensure the safety of the motoring public. This truly was a united effort involving many agencies. I would like to thank INDOT, the Indiana State Police, Governor Mike Pence, Senator Brandt Hershman, Senator Joe Donnelly, and the Thorntown Police Department. I would also like to personally thank the public for their overwhelming support.” Sheriff Mike Nielsen

The Boone County Sheriff’s Office would like to remind the public while traveling: Please pay attention to your surroundings, drive defensively. Be prepared to stop and watch for slowed or stopped traffic in the area, don’t get distracted. There will be increased police presence in the area to insure a safe transition. Always drive safely.