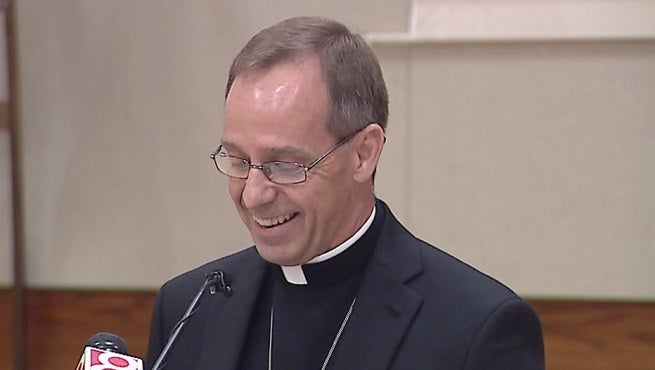 INDIANAPOLIS (WISH) — The Roman Catholic Archdiocese of Indianapolis has suspended one of its retired priests after a person reported abuse as a child several decades ago.

The Rev. John Maung is prohibited from all public ministry while an investigation is pending, the archdiocese said in a statement in a recent post its website. Maung has denied the claim. Based on his date of birth on the Archdiocese of Indianapolis biography, Maung is 79 years old.

“The Archdiocese immediately made a report to civil authorities and the Archdiocesan Review Board,” the statement said.

It also said Maung served in these parishes: St. Lawrence, 6950 E. 46th St. in Lawrence; St. Gabriel, Connersville; and St. Joseph, Shelbyville. He also resided at Holy Spirit Parish, 7243 E. 10th St. in Indianapolis. Following his retirement in 2009, he continued to help with sacramental needs at parishes in the Archdiocese of Indianapolis.

He was ordained in 1963, according to his online biography. He had also served in Madras, India; Mandalay, Burma; and San Francisco. He retired in 2009.

The statement included information on how to make a report of abuse to the archdiocese.

The Most Rev. Charles C. Thompson, the archbishop of Indianapolis, also on Wednesday issued a separate statement about the crisis of clergy sexual abuse. It is titled “Archbishop calls for renewed transparency, accountability” and reads:

Dear Sisters and Brothers in Christ:

When I was called to be a bishop just more than seven years ago, I wanted to believe that the Church had effectively dealt with the crisis of clergy sexual abuse, especially in terms of accountability and transparency. I was not so naïve as to think that all victims had come forward, or that all acts of abuse had been reported. In retrospect, I wonder if I was hoping against hope.

Coming on the heels of the scandal surrounding then-Cardinal Theodore E. McCarrick that evidently involved at least three different large dioceses, and apparently known by more than a few people, the nearly 900 pages of the grand jury report on clergy sexual abuse in six dioceses of Pennsylvania has seemingly ripped the scab off a horrible wound that was just beginning to possibly heal. While the report revealed only two cases that are within the current statute of limitations in Pennsylvania, the sheer volume of numbers—clergy, victims and cases—of graphic acts of horrendous abuse are appalling, devastating and sickening. It’s as if a dark, heavy pall has been thrust upon us yet again.

One child, in fact, one act, is too many. It is deeply painful and shameful that so many lives have been so wounded, broken and scarred for life. We can spare no expense of time, talent and treasure to assure the protection and well-being of each and every child, young person and vulnerable adult both within and outside the Church.

Being from such a large family, I am aware of a couple of family members who have been sexually abused, one as a child and the other as a very young adult. Given the size of my extended family—which has included 50 aunts and uncles, 90 first cousins and more than 200 second cousins—there are likely more who have suffered such atrocities.

As I mentioned in a previous statement, coinciding with the United States Conference of Catholic Bishops by Cardinal Daniel DiNardo of Galveston‑Houston, USCCB president, and numerous other bishops, there is much work to be done in the coming weeks to set things right, by the grace of God, once and for all. Such work cannot be left to just the bishops. Lay persons, especially those with particular skills, must be intricately involved in the process. There is so much to do in so little time to get it done, but it must be done right. There can be no further cover‑up. All, especially bishops, must be held accountable.

I do believe in transformation, that new life can come from ashes, and salvation is made possible through the passion, death and resurrection of Jesus Christ. Yet, there is no way to the empty tomb except by way of the cross. We cannot go over, under or around it. We must be willing to suffer and sacrifice to actually become the persons and people of God that we are called to be. We are called to holiness, not to mediocrity or mere survival.

To each and every victim of abuse—child, minor and adult—especially those at the hands of Catholic clergy, I offer my deepest apology and heartfelt pledge to do all that is humanly possible to be a part of the solution. As one means of effort toward that end, I will be seeking the guidance of the Archdiocesan Review Board to assist me in preparing a list, for publication, of all clergy, living and deceased, with a substantiated claim of sexual abuse against a child or minor.

These are very tough times, and we have some very rough waters to navigate. Only prayer, truth and justice will see us through to the other side of all that is pressing upon us. We need to know of anyone who has been hurt and how you have been violated. We must do everything necessary to make sure neither abuse nor cover-up ever happens again.

Your Brother in Christ,