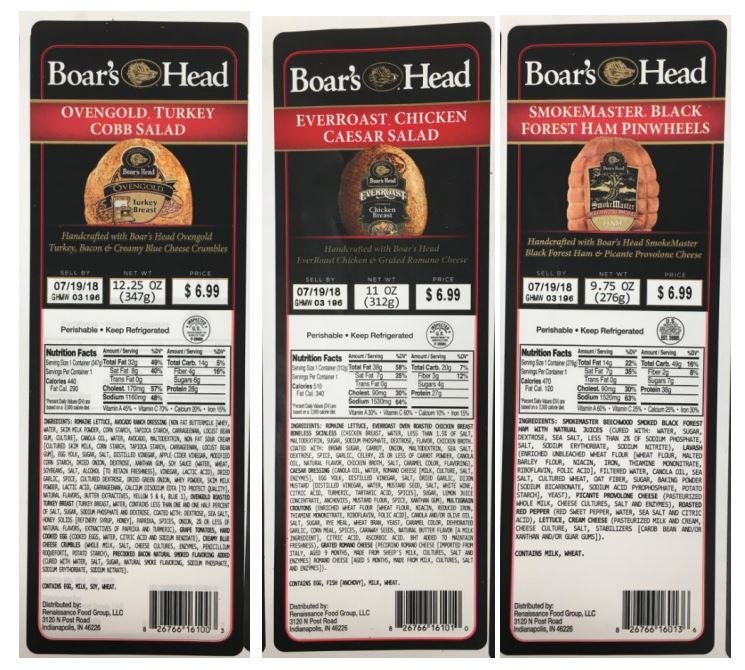 WASHINGTON (WISH) – Salad and wrap products distributed from an Indianapolis business are being recalled due to concerns about contamination with Cyclospora, the U.S. Department of Agriculture’s Food Safety and Inspection Service said Tuesday in a public health alert.

Caito Foods of Indianapolis distributed the beef, pork and poultry salad and wrap products. They were produced from July 15-18 with the “Best By,” “Enjoy by,” Best if Sold By” or “Sell By” dates ranging from July 18 through July 23. The products bear establishment number “EST. 39985 or P-39985” inside or next to the USDA mark of inspection. These items were shipped to distribution centers nationwide. They are being sold by Gordon Food Service, Caito Foods, Kroger, Trader Joe’s and Walgreens. Product names include Boar’s Head, deLish, good to go!, Gordon Highway, Trader’s Giotto’s, Trader Ming’s and Trader Joe’s.

The problem was discovered when Caito Foods received notification from its lettuce supplier, Fresh Express, that the chopped romaine that is used to manufacture some of their salads and wraps was being recalled.

The federal government is concerned that some product may be in consumers’ refrigerators and that consumers may be at risk due to the length of the Cyclospora incubation period. Consumers who have purchased these products are urged not to consume them. These products should be thrown away or returned to the place of purchase. Caito Foods and the federal government are working together to remove the products from commerce.

Anyone concerned about an illness should contact a health care provider. Cyclospora infection is an illness cause by the intestinal parasite Cyclospora cayetanensis. The incubation period for Cyclospora ranges from two to 14 days, which would include the dates of July 25 through Aug. 6. Illnesses might not have been reported yet due to the time it takes between when a person becomes ill and when the illness is reported. Cyclospora infections could take up to six weeks to develop into an illness.