Indy company makes only raw coconut oil in the world 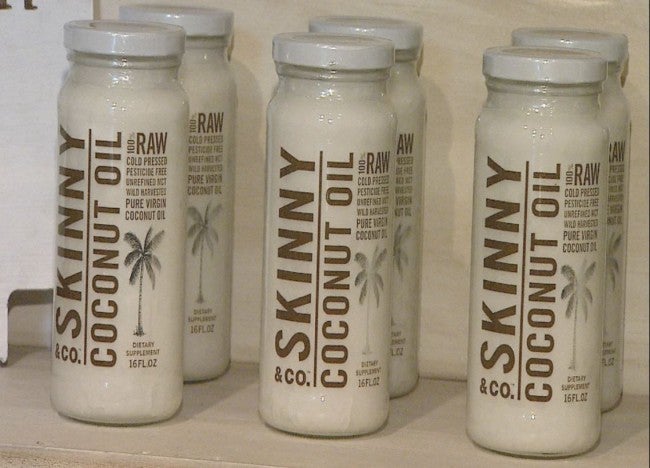 INDIANAPOLIS (WISH) – It seems you can’t go online or read a magazine without seeing something about the benefits of coconut oil. Whether for health or beauty, this natural product isn’t going away anytime soon, and a new business in Indianapolis plans to take the craze a step further.

“The hottest the coconut ever gets during our processing is 85 degrees – which is cooler than the temperatures it sees while it’s hanging on the tree,” says Michael Smeehuyzen, the head of Business Development for Skinny & Co.

The company was started by two Indianapolis brothers after a chance meeting with an engineer in Vietnam who had developed a new closed-loop system for processing coconuts. The brothers mailed some of the coconut oil to their mother in Indianapolis, Joy Reece, who gave the raw coconut oil rave reviews.

Soon after, Skinny & Co. Coconut Oil was born. The brothers stayed in Vietnam to oversee operations while Reece became the Vice President, and the American headquarters for the product was established in Broad Ripple at a location that backs up to the Monon Trail.

“All the operations, shipping, marketing, everything is run out of our team here [in Broad Ripple],” says Smeehuyzen. “We have about 5 or 6 people here in Indianapolis that get the product out to local businesses here but also nationally and internationally. We’re in 8 countries and it’s been going really well.”How Skinny is made

The majority of coconut oils on the market claim to be “cold pressed,” but are actually heated prior to the pressing process. This extracts more oil from each individual coconut, yet raises the temperature over 120 degrees and destroys some of the nutritional value.

Skinny’s process claims to keep the natural fat cells intact. Each coconut is hand selected from a grove in Vietnam. Within an hour of being picked, the coconut is cut open and the meat is wet milled or grated. Then, the moisture is extracted in the dehumidification system, which creates something similar to coconut flour. The flour is then placed in a hand press to extract all the oil out of the flour.

“Because we don’t use heat on the coconut meat, we can only extract about 70 percent of the oil from each coconut, so it takes more coconuts to fill a jar.

A promotional photo (right) shows Skinny Coconut Oil next to four unnamed brands. The photo shows the clarity of Skinny once it’s heated in the jar and how the oil reconstitutes when it’s cooled.

“When you look at Skinny, we’ve actually melted down and re-solidified our coconut oil compared to the 4 other brands on the market – the best [brands] that people think of – and when it re-solidifies you see the fat cells in it,” says Smeehuyzen.

A considerable amount of scientific research has been done to understand the benefits of coconut oil, and almost all of that research has used “virgin” coconut oil – which means there are no other chemicals, solvents or fillers in the oil used for testing.

Coconut oil consists predominately of saturated fats, but it isn’t the typical long-chain fatty acid found in foods like cheese and steak. Coconut oil is made of Medium Chain Triglycerides (MCTs) which are processed in the liver rather than the intestines. Once in the liver, the MCTs provide a quick source of energy, or ketones.

Ketone is a chemical produced when there is a shortage of insulin in the blood and the body breaks down body fat for energy. Ketones are a sign that your body is using fat for energy – which supports research like this study that found eating 15 to 30 grams – equivalent to 1 to 2 tablespoons – of coconut oil daily increases your energy expenditure to burn about 120 calories more per day.

Another study found that coconut oil can improve blood cholesterol levels and may lower your risk of heart disease. The randomized, double-blind, clinical trial involved 40 women aged 20-40 years. For 12 weeks half the women were given 2 tablespoons of coconut oil daily and instructed to walk 50 minutes a day. Researchers found the coconut oil promoted a reduction in fat around the abdomen.

Virgin coconut oil has also been found to heal wounds faster and reduce stress while providing higher levels of brain antioxidants. The use of coconut oil as a mouthwash has also shown a statistically significant decrease in plaque and gingivitis in a process known as oil-pulling.

Many people also use coconut oil for cosmetic purposes and to improve the appearance of skin and hair. Studies on individuals with dry skin show that coconut oil can improve the moisture and lipid content of the skin.

Coconut oil can also protect hair from sun damage. One study showed the oil can block 20 percent of the sun’s rays.

“It’s like ‘how can it do this much?’ but it really can,” says Smeehuyzen. “Everything from whitening your teeth to helping you lose weight to even throwing it in your hair.”

2.       Use on homemade popcorn for a texture that’s better than butter

3.       Brush coconut oil onto slices of sweet potatoes, then bake

4.       Mix one part coconut oil with one part baking soda for a natural toothpaste

6.       Swish 1 tablespoon of coconut oil as a mouthwash; swish for at least 5 minutes