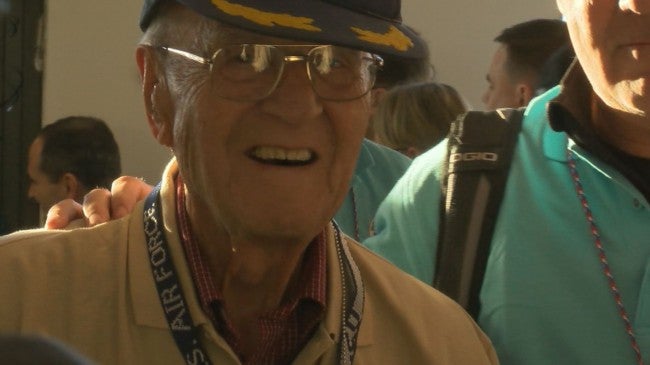 INDIANAPOLIS (WISH) – On Halloween Day, 178 veterans headed to Washington, D.C. on an all-expenses-paid trip to our nation’s capital to see their memorials.

It’s become an urgent mission for those behind the Indy Honor Flight: to give veterans a chance to see their memorials, and receive a proper ‘thank you’ before it’s too late.

The average age of a World War II veteran is now 90 years old. Grant Thompson, Indy Honor Flight Founder and Chairman, says their mission now is to locate these veterans and help them get to D.C.

“It’s the most beautiful thing I’ve ever witnessed, ever been a part of,” said Thompson. “This is a generation who has given us so much.”

The veterans leave early in the morning, and arrive in Washington D.C. to a grand welcome. These flights were welcomed by D.C. alumni clubs from Purdue and other Indiana colleges. Also waiting at the gate, some travelers who simply heard this honor flight was coming in.

“There was an announcement that this gate was bringing in all these wonderful people,” explained Gale Nemec from Washington, D.C. “I’m so privileged to be able to thank them for everything they did.”

“It brought tears to my eyes to have all these people come to the airport, and want to shake your hand,” said veteran Ken Pope of Bloomington. “It was unexpected.”

The veterans then, along with countless volunteers, head to the World War II Memorial, Vietnam and Korean War Veteran Memorials, Arlington National Cemetery among others.

It’s a day to honor their service and sacrifice, to remember those who aren’t there with them and to say the words they may not have heard when they came back from their service: “Thank you.”

It’s also a day of many emotions.

Amidst the cheers and “thank you’s,” to see their memorials, it brings everything full circle, for some vets.

Everett Latham served in the army in Europe during World War II.

“I helped liberate a concentration camp. I got two purple hearts and a bronze star,” Latham said, sitting near the World War II Memorial. “I’m not sorry I went at all, I’m not sorry I carry these wounds with me. I’m thankful I was able to do it, for my country.”

“You can’t anticipate what this means to guys like me,” said Latham. “Some of those people gave everything, and I was lucky enough to get back.”

Among the veterans on the flight as well, USS Indianapolis survivor 88-year-old Richard Thelen, who came down from Lansing, Michigan, for the flight.

“70 years ago, the ship went down. I was 18 when it went down,” Thelen said. “My dad actually brought me home, because he took me to the railroad station after boot camp. He shook my hand real firmly, and said ‘Dick I want you to come home.’ I said, ‘Don’t worry about it Dad; the war is winding down in Europe.’ This is April of ’45. So the war is almost over. But every time I was ready to give up, there was my dad’s face. So he brought me home.”

“I go around and talk to school kids. My favorite slogan is, ‘Never give up. If I gave up years ago, I’d never been here,” Thelen added.

Those who are not here with them today are not forgotten. Name, after name is written at the Vietnam Veterans Memorial.

Vietnam veteran Wayne Smith has volunteered with the honor flight about three years.

“I didn’t come here [to the Vietnam Veterans Memorial], until two years ago,” said Smith. “It takes that amount of time to put yourself in the right frame of mind, so you can handle the emotions when you come here. You just kind of stand and look at it, and you just think about to your time in Vietnam and shake your head. Too many boys died here, and this is just a symbol of it.”

He says he volunteers, to be able to say thank you to other veterans, and hear their stories.

More names and faces are honored at the Korean War Veterans Memorial.

“It’s beautiful. They did a magnificent job,” said one Korean War veteran.

At Arlington National Cemetery, the veterans watch the Changing of the Guard ritual at the Tomb of the Unknown Soldier.

All those names, those faces, those lost: never forgotten.

On the way home, the veterans receive yet another special surprise.

The volunteers surprise them with “mail call:” dozens of pieces of mail, saying “thank you,” from their loved ones.

Once they arrive back in Plainfield, the veterans once again, receive a giant surprise: a welcome home and a giant “thank you,” from hundreds of people waiting for them.

“This is beyond my imagination,” said one veteran.

“You changed my life – thank you,” said one cheering woman to a veteran, shaking his hand.

The moments just don’t stop as the veterans enter the gym to cheers and handshakes.

“We love you. We will never forget what you’ve given us. And we are eternally grateful for that,” said Grant Thompson, Indy Honor Flight founder and chairman. Thompson started the Indy Honor Flight hub with the help of many others in 2012.

During each trip, a lot of care and hard work goes into safely transporting these veterans to their memorials: the medics on each bus, and a guardian volunteer for each veteran.

For the first time, one veteran fell on a recent trip while walking to lay the wreath at Arlington National Cemetery.

Days later, the honor flight director made sure he not only still saw all the memorials in D.C., but they arranged a special welcome home at the airport for the B-17 Gunner who was once shot down over Berlin, POW survivor Sgt. 93-year-old Norbert Arvin.

Hundreds turned out at the airport for the special welcome home. Mr. Arvin even got the traditional kiss on the cheek from lipsticked ladies.

Thompson says he always tells the crowds waiting as homecoming starts for the 178 veterans that the last man coming home, deserves just as much applause as the first man. Days after the rest had come home, Mr. Arvin got that same treatment.

Arvin told us he couldn’t believe all these people turned out to thank him for his service, and welcome him safely home.

“This is so awesome. I had no idea in the world, anything like this would ever happen to me,” said Arvin. “I appreciate it. I just love you all. I did what I had to do, that was all [speaking about his service.] Thank you so much.”One veteran’s journey on the Indy Honor Flight

“I would gladly honor my country again”

WWII Army Veteran Harold Harrington says his daughter told him about the trip to Washington, D.C.

“This here is something that everybody should do, at one time in their life. This is so gorgeous,” said Harrington, looking out at the World War Two Memorial. “I’m just so happy I had a chance to come here.”

Harrington says he signed up for the army before he was 18. He says his dad signed for him, and his brothers also signed up. One brother was discharged because of an enlarged heart.

Harold and his brother Raymond spent seven days together before they were sent overseas.

“This is my brother Raymond who got killed in Okinawa just before the war was over,” explained Harrington, showing a picture of the two of them together in uniform.

Harrington says he landed at Omaha Beach, went through France, Germany and Belgium, was a scout, and helped liberate a concentration camp in France. During maneuvers in Germany he says, one of his comrades hit a land mine. He ended up in a coma for two days and had to relearn to walk.

“I’d do it again. I would gladly honor my country again. I sure would,” said Harrington.

The 90-year-old is the eternal optimist: you likely won’t catch him without a smile on his face.

As he walked into a crowded room waiting his return home, he said, “This is fantastic. This is too much.”

“This is the most amazing thing that could ever happen, and I’m so proud of my father, and all of these other veterans, for having served and saved our United States of America. It’s truly an honor to be here today,” said Harold’s daughter, Pam.Grandson and grandfather take Indy Honor Flight trip together

“I wouldn’t take it and change it for the world”

Richard ‘Dick’ Deitchman, a naval aviator in WWII, went on the flight with his grandson, Joe.

Joe is also a veteran, having served in Afghanistan with the US Army.

Dick Deitchman said he would go on the honor flight, if Joe did.

“I have nothing but the utmost respect for the men and women of this generation,” said Joe. “It’s my honor.”

Dick Deitchman was 18 years old when he enlisted in the Navy.

“This is World War II. Everyone wanted to get in, as quickly as they possibly could,” he said.

It was a family affair: he and his two brothers all served in the navy. After months of training across the country, Deitchman headed to the Philippines. He flew a torpedo bomber.

Deitchman was there for the Battle of Leyte Gulf. He said the Japanese ships came down, and they didn’t know it at first.

“We looked out, and the Japanese ships are coming down behind us. We thought, ‘Holy cow, what do we do?’ Deitchman explained. “We went out and dropped our torpedoes. I got a hit.”

He said later they landed on another ship, and it was there they were hit by a kamikaze.

“A kamikaze hit our ship, and went right into the ready room. About 50 or 60 feet from where I had been sitting,” said Deitchman. That kamikaze killed a hundred people, he said.

On Deitchman’s last mission, he dropped his torpedoes, but later was forced to make an emergency landing in the water. One man with him broke his leg, and they waited in the water on a raft until they were rescued by others. Deitchman came home safely.

70 years later, he sits with his grandson Joe, recalling the stories.

Joe worked on helicopters in Afghanistan.

“I feel like we’re given so much in life, why not give more,” said Joe, of why he got into the military.

He says he and his grandfather have bonded over their shared experience of service: golfing together with his grandpa’s buddies, sharing stories.

“When I got back, I wanted to forget everything about what I had done and seen,” explained Joe Deitchman. “These guys [his grandfather and friends] were constantly, just talk to me about what they do, how they went about things. We share each other’s stories, and each other’s griefs with each other so it’s not as hard on ourselves. We try to use the battle buddy system.”

“I wouldn’t take it and change it for the world,” said Joe, speaking of serving his country.Indy Honor Flight looking for veterans

The Indy Honor Flight is looking for World War II veterans. They say as the veterans get older, their mission becomes more urgent to find these vets and help them see their memorials.Click here to see our story on the history of the Indy Honor Flight.

If you know any veterans who served in World War II, contact the Indy Honor Flight through their website, or call 317-559-1600. You can also sign up on the website to donate or find ways you can help. The Indy Honor Flight is also hosting ‘Dinner with a Hoosier Hero’ on Saturday, Nov. 14. 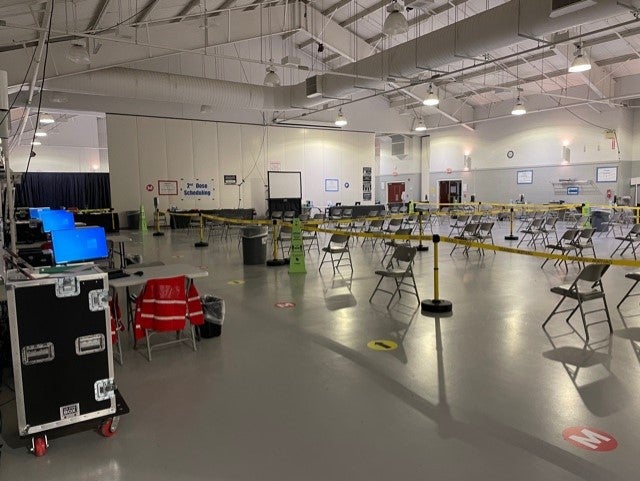