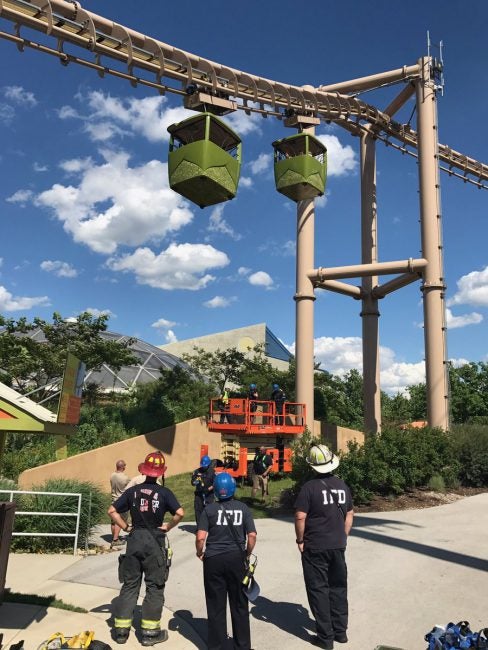 Monday afternoon around 4:15, crews were called to the Indianapolis Zoo on a rope rescue. According to a tweet from IFD, all five passengers — three adults and two kids — were safely on the ground as of around 5:43 p.m.:

Judy Palermo, senior manager of public relations for Indianapolis Zoo, confirmed IFD crews were assisting zoo personnel and that personnel brought a lift to the scene.

Public Information Officer Gustavo Chavez with IFD says rescues from the Skyline ride happen every couple years because the ride includes many sensors that cause the ride to shut down from time to time. This time it got stuck over the orangutan exhibit. Chavez says the second car was stuck behind the stopped car.

Chavez also says IFD has worked with zoo personnel to ensure they have standard procedures ready if and when ride passengers become stuck.

Palermo confirmed two adults and one child were in one stopped car, while the other held one adult and one child.

The process of getting passengers out of the two stuck cars took roughly an hour and a half.