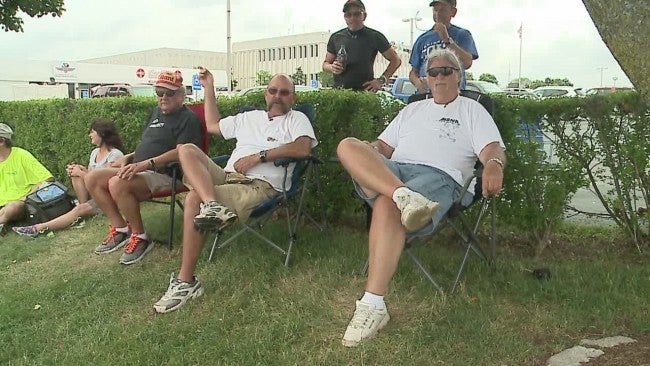 INDIANAPOLIS (WISH) – It’s been a dangerous week of practice unlike any fans say they’ve seen in recent years.

IndyCar driver James Hinchcliffe crashed into the wall during practice Monday, forcing him to get surgery on his leg at IU Methodist Hospital immediately after it happened. It’s the fourth major wreck at IMS since Indy 500 practice started last week.

Fans said crashes are expected, but seeing so many happen during practice when there’s more space between cars concerned them. And come race day when more than 30 drivers are on the track at once, fans hope scenes like Manday’s don’t happen.

Seated in the shade near the Hall of Fame Museum, fans Tony Ray and Kenny Cherry might not appear to have the best seat in the house for practice.

But when you’re as dedicated a fan as they are, you get your fair share of excitement no matter where you soak in the view.

“My first race was (in) ’58,” said Cherry. “I grew up right behind the third turn of the track,” added Ray. “As a young kid I could sit up on the roof of the house, watch the cars come out of two and down the back straightaway.”

But this year it’s not the high speeds stealing the spotlight.

“We never want to see the drivers get injured out here,” said Ray. But that’s unfortunately what happened Monday. Hinchcliffe’s crash was one of several during Indy 500 practice this season. Last week, Josef Newgarden and Helio Castroneves went airborne after their cars hit the wall.

“It’s the first one I’ve seen where he got up in the air and actually flipped,” Ray said of Castroneves’ crash.

The incidents led to IndyCar calling for safety changes. Qualifying speeds were reduced after Ed Carpenter wrecked Sunday. Chevy IndyCar teams were advised to adjust their new aero kits for fear they might have contributed to the cars flipping over. The kits were first tested on an oval track only two weeks ago.

“I think they should have done a little bit more testing before they come here to ‘The Greatest Spectacle in Racing,’ the highlight of their series,” said Ray.

Hundreds of thousands of people will fill the speedway for the Indy 500, which Cherry worries is the worst time for another wreck to happen.

“You don’t want it getting up in the catch fence or clearing the fence, that’d be a catastrophe,” he said.

24-Hour News 8  tried getting in touch with IMS officials throughout the evening to see if all of the accidents would lead to safety changes, specifically for the fans. But they weren’t able to get back to us in light of what happened to Hinchcliffe.