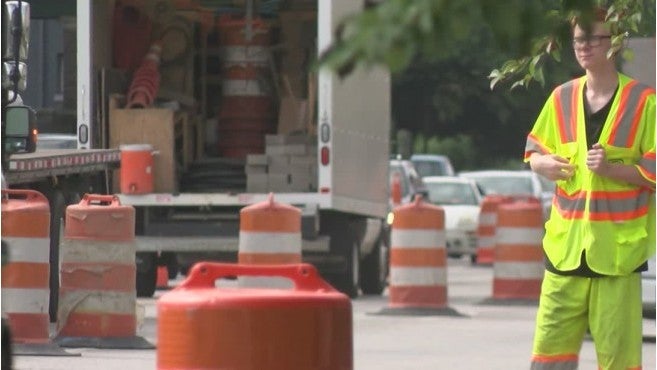 INDIANAPOLIS (WISH) – It will take a lot of orange to make the Red Line.

Work on the IndyGo bus project is restricting traffic across the city. According to IndyGo, parts of Meridian Street will be closed off throughout the rest of the year.

The west side of the road was blocked Wednesday, and traffic was moving in both directions in single lanes on the other side of the road. Stretches of the sidewalk also were closed.

Work is happening on the city’s south side as well.

“I don’t know. They got a Purple Line, Red Line. I don’t understand any of it, really,” IndyGo rider Leslie Hancock said.

IndyGo says the Red Line will run between the Broad Ripple neighborhood and the University of Indianapolis 20 hours per day seven days a week.

Bus lanes will run down the center of the roads. City leaders expect the complete Red Line construction to be finished in the fall of 2019.

“The best way to handle any construction project in this is to know ahead of time what the impact will be to you,” Day said.

According to Day, the south side Red Line work on Shelby Street should wrap up within the next couple months. She expects the Meridian Street portion to be finished early next year.

“I’m quite sure that’s for the best,” Matthews said before continuing his jog. “We need a lot more mass transportation here.”

“It’s going to bring more business to the area,” Vo said. “In order to make our cities more beautiful, we have to put up with the construction.”

IndyGo said they will not need to narrow or move Meridian sidewalks for the project, but some sidewalks are closed. Day said workers will repave some sidewalks.