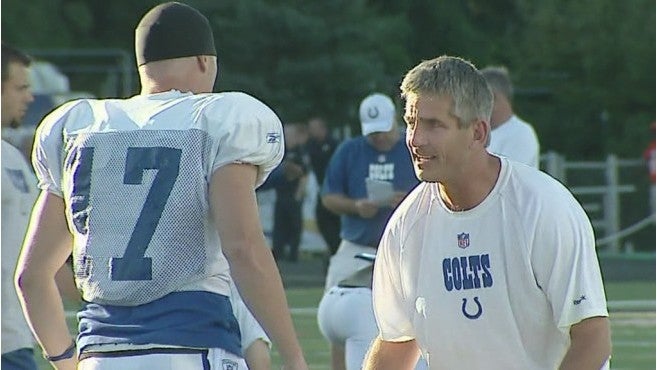 INDIANAPOLIS (WISH) — Between this past weekend’s biblical rain and the return of ‘The Savior’ himself, Frank Reich’s head coaching debut was rather quiet. Fitting, if you know Frank.

“Coach Reich is probably like, the most quiet coach,” Colts running back Nyheim Hines said. “Unless he has to go up there and talk in front of the team, he’s really quiet. Super smart, I think he’s up there with Andrew (Luck).”

“He’s very calm when he needs to be, but you can tell he gets really excited,” Colts offensive lineman Joe Haeg said. “Especially the night before games and in the locker room before the game. He loves the game and it’s fun to be around him.”

After taking an offer as a volunteer coach from former Colts General Manager Bill Polian, Reich’s climbed to the top in just ten years. That is saying something. As for the week 1 heartbreaker — it didn’t change much with the Colts first-year head coach.

“There are so many emotions in the game of football, I think they had me in the press box for a long time because I’m so up and down…. I just get emotional,” Colts offensive coordinator Nick Sirianni said. “He is truly a great quarterback and a head coach. He always plays the next play and quarterbacks have to do that.”

The trouble for first year head coaches doesn’t stop here in Indianapolis. Across the NFL, rookie head coaches went 0-7 during week one and the problem here going forward — the Colts are staring down a potential fifth consecutive 0-2 start.

“We’re all still learning,” tight end Erik Swoope said. “Every coach, even if you’ve been in the building and been a part of something it’s still a process for them. We all have to grow and I know coach Reich will do fantastic. We’ll fight for him.”

The weather is going to stink in Washington. But nothing sounds worse than 0-2. Again.