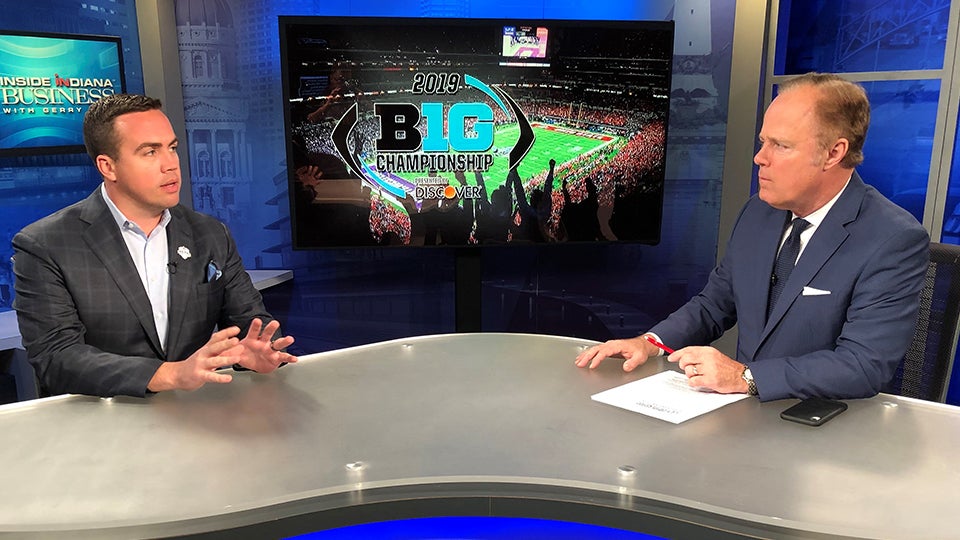 The Indiana Sports Corp. (ISC) estimates the weekend has a $19.5 million economic impact on the region’s economy, but as Indy looks to lock in games beyond 2021, when its current contract with the Big Ten Conference expires, it will have some company.

“Certainly Detroit and Minneapolis we know for a fact will be enthusiastic about bidding on this opportunity,” said ISC President Ryan Vaughn. “We don’t take it for granted, we intend to compete very hard and keep it here permanently.”

Vaughn talked about keeping the Big Ten Championship and other high profile events on this weekend’s edition of “Inside INdiana Business with Gerry Dick.”

Indianapolis has been the only home the Big Ten Football Championship has known, after being handpicked by the conference to host the inaugural game in 2011.

Vaughn estimates the game has generated approximately $200 million in economic impact over nearly a decade, not to mention the visibility from network television coverage on Fox Spots. He says the game is also typically the biggest Airbnb weekend of the year in Indianapolis.

The Big Ten Football Championship is far from the only item on the ISC’s agenda. The organization and its partners are gearing up for an unprecedented string big-time events, including the 2021 NCAA Men’s Final Four, 2021 NBA All-Star Weekend and 2022 College Football National Championship among numerous others.

ISC and the city expect the events to generate a combined $670 million in economic impact.

In his first State of Sports address in late 2017, Vaughn announced the creation of the Indy Championship Fund, a $25 million effort to support a four-year stretch of major events that will be “unlike anything Indianapolis has enjoyed in the past.”

Reflecting back on the Memorial Day 2019 tornado outbreak