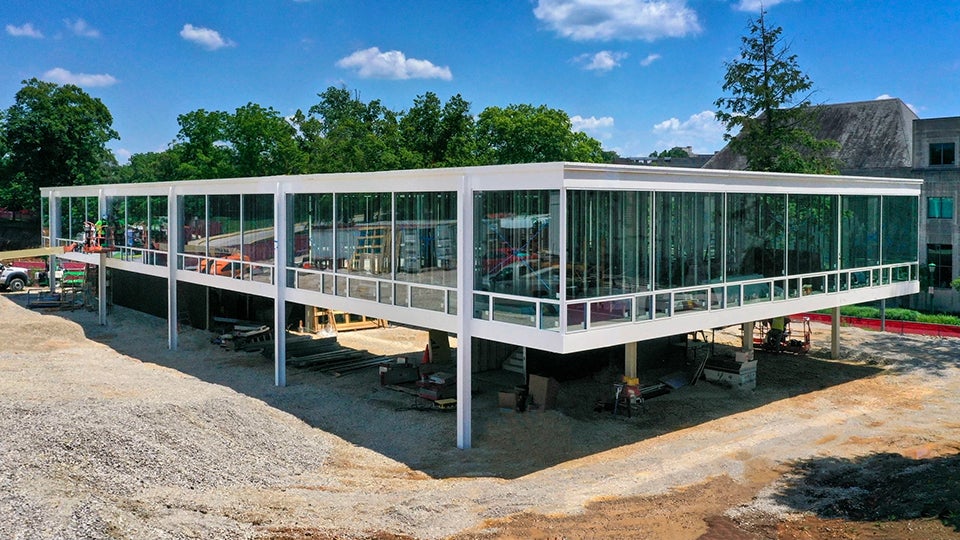 BLOOMINGTON, Ind. (Inside INdiana Business) — Indiana University this week celebrated the dedication of the Mies Building for the Eskenazi School of Art, Architecture + Design on the Bloomington campus. The facility, currently under construction, is being built with a design originally created by architect Lugwig Mies van der Rohe in 1952.

The Mies design was originally commissioned for the IU fraternity Alpha Theta chapter of Pi Lambda Phi, but the project was ultimately abandoned. The university says the design was rediscovered in 2013 after Sidney Eskenazi, who was a member of the chapter during his days at IU, informed President Michael McRobbie of the design’s existence.

IU says documentation of the project was found in the archives of the Art Institute of Chicago and New York’s Museum of Modern Art. The university announced plans to build the two-story, 10,000-square-foot building in 2019, with construction being paid for with a portion of a $20 million donation from Sidney and Lois Eskenazi

“This new building, situated in the center of our beautiful Bloomington campus, will serve to inspire and elevate IU’s students of art, architecture and design, as well as our excellent faculty, as it advances the growth and development of one of IU’s newest schools,” said McRobbie. “All of us at IU are immensely grateful for the vision, support and generosity of Sidney and Lois Eskenazi, who have literally brought this astonishing work of architecture out of obscurity and into the light and who continue to have a transformational impact on our world-class community of scholars. To acquire a building for the campus designed by Mies van der Rohe is the equivalent of IU’s Eskenazi Museum of Art acquiring a new Picasso or Pollock.”

The university held a dedication ceremony that included the Eskenazis, IU alumni and donors, as well as Dirk Lohan, the grandson of Ludwig Mies van der Rohe.

“As someone who worked with my grandfather Mies van der Rohe since 1957, I thought I knew all the projects he ever worked on,” Lohan said. “But I never heard about this project until Indiana University contacted me about its wish to build this 70-year-old design. After contemplating the request, I and the three other grandchildren concluded this would indeed be a wonderful assertion of Mies’ significance as an architect.

The Mies Building is slated to open this fall.